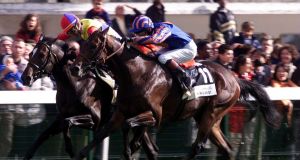 The Group One Tattersalls Gold Cup has been moved to the end of July and will be open to three-year-old runners for the first time.

That is among the details of Horse Racing Ireland’s revised Group race programme for the rest of 2020 due to the Covid-19 pandemic.

With racing behind set to return here at Naas on June 8th – and the Irish Guineas races due to take place later that week – HRI has outlined how it will roll out the rest of Flat racing’s black-type contests this season.

It said a full complement of Group races will be staged, while the vital two-year-old pattern programme will begin six weeks later than usual in early July.

The Tattersalls Gold Cup, normally run on Guineas weekend, and won in the past by illustrious names such as Montjeu, will now take place on July 26th at the Curragh.

Previously confined to older horses it will be open to three-year-olds for the first time to fill a gap in the pattern programme.

Every other Irish Group One race will take place on its original date and at its traditional venue.

When racing resumes behind closed doors next month 87 meetings will have been since the last took place on March 24th. That was just after the start of the 2020 Flat season on turf.

“2020 will be anything but a normal year, but in the circumstances we have tried to preserve the opportunities which the Irish race programme offers to the better horse,” said HRI’s chief executive Brian Kavanagh on Tuesday.

“The two-year-old Group race programme will start about six weeks later than normal in early July but the full complement of opportunities will be run between then and season end,” he added.

The first day back at Naas will see a pair of Listed contests run. A day later, on Tuesday, June 9th, is set to see a Leopardstown card featuring the Derrinstown Stud Derby Trial. Action will switch to Navan on the Wednesday with a programme topped by the Salsabil Stakes.

The 2,000 Guineas will take place at the Curragh on Friday, June 12th. A day later the 1,000 Guineas will be run on a bumper card that also includes the Lincolnshire as well as the Moorsbridge, Gallinule and Gladness Stakes.

Irish Champions Weekend goes ahead on September 12th-13th while the final black-type action of the year on turf will take place at Naas on November 1st.

Even then the impact of the Coronavirus emergency will be evident as the Group Three Athasi Stakes, traditionally a spring trial for the Irish 1,000 Guineas, is part of the programme.

Separately on Tuesday, the leading bloodstock consignor and buyer, Eddie O’Leary, who also runs the Gigginstown Stud operation said a case can be made for pushing the big race programme back a month in both Ireland and Britain.

In particular O’Leary was critical of the decision to keep Royal Ascot on its scheduled start date of June 16th should British racing get a green light to resume at the start of next month.

There are fears it means Royal Ascot is all but ruled out for Irish two-year-olds, whose first opportunity to race will have only come a week beforehand.

“Personally, for the life of me, I can’t see why they can’t move every single thing back a month, including the sales. Everything would slot into its own place. The pattern would run out exactly as it should be and the pattern would work,” O’Leary added.

“I can’t for the life of me understand why Ascot isn’t put back a month or six weeks, especially as it is behind closed doors so who cares,” he said. “But they’ll have it now before racing even starts nearly, which is sad.”

Ascot’s authorities have said they feel there is a duty to get the meeting done and help Britain’s Flat racing pattern return to some form of normality later in the summer.

O’Leary pointed to 1955 when Royal Ascot was postponed to July due to a train strike as evidence of previous flexibility with the world famous meeting.

He even ventured if somebody might ask the royal meeting’s most famous patron about a similar move now. “Seemingly it can’t be changed unless by royal decree: would nobody ask the good lady. She’s a sure one to help!”

On the bloodstock side of the sector he said the importance of racing resuming can hardly be overstated.

“No one knows where they are because racing hasn’t started back yet. The entire industry works with racing. We’ve got to get racing back and hopefully there will be people who want to buy a racehorse,” O’Leary said.