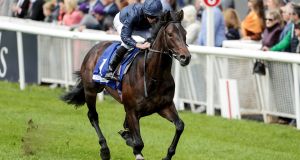 The prospect of a crammed classic schedule means Aidan O’Brien anticipates having to split his 2,000 Guineas and Derby prospects between Ireland and England.

Britain’s racing authorities are currently planning to run both their Guineas races at Newmarket on June 5th, subject to the sport being allowed resume there at the start of next month due to the Covid-19 pandemic.

The following weekend (June 12th-13th) will see the Irish 2,000 and 1,000 Guineas take place at the Curragh under Horse Racing Ireland’s revamped fixture programme for when the sport starts here on June 8th.

HRI’s decision to keep the Irish Derby on June 27th means it will be run just a week before the July 4th date on which the British Horseracing Authority hopes to stage both the Derby and the Oaks at Epsom.

Such close proximity of the classics on both sides of the Irish Sea makes it unlikely any horse will attempt to run in both Guineas or both Derbies this year.

“I would imagine that won’t happen. Probably the same horses couldn’t do both. So we will have to decide what way they’re going to be split,” O’Brien conceded on Monday.

O’Brien’s record 10 winners of the English 2,000 Guineas include four horses that doubled up in the Curragh version. Four of his seven Epsom Derby heroes also proceeded to also win at the Curragh.

Once again the champion trainer has a large number of well-bred classic hopefuls including Arizona who is second favourite for Newmarket’s Guineas behind Pinatubo.

O’Brien’s well-regarded middle-distance prospect Mogul was cut to 10-1 for the Epsom Derby in one list on Monday.

Arizona and Wichita were nominated as colts likely to be sent to Newmarket should the classics there go ahead as hoped. It means others such as Innisfree, Armory and Lope Y Fernandez could potentially wait for the Guineas here.

“They are all Guineas-type horses. We had decided to give them an easy week this week because they have been training a few times already.

“I suppose Arizona and Wichita were the two horses that have travelled a lot already. I would imagine an awful lot of stuff will come into being considered when we’re deciding.

“There is going to be a lot of factors to consider, where we decide to go and what we’re going to go with,” O’Brien said.

Even Europe’s most powerful operation has been left to feel its way through the uncertainty created by the coronavirus emergency.

Although racing is set to resume in Ireland in just under three weeks’ time, the government restriction requiring anyone entering or re-entering the country to self-isolate for 14 days, could see the Irish classics effectively confined to horses trained here.

O’Brien is also awaiting the publication of a detailed fixture list by HRI while the impact of Royal Ascot remaining on its mid-June dates could make it an unrealistic prospect for Irish-based two-year-olds.

“We are always used to the pattern and the horses are trained for the races as you go along. But everything has just completely changed,” he said.

“Everything every week is being assessed so we will have to wait and see. Everything is so changed it’s hard to get your head around anything at the moment,” O’Brien added.

The strength of Jessica Harrington’s team of potential classic fillies is indicated by four of them figuring among the top five In Ladbrokes betting for the Irish 1,000 Guineas.

They include Albigna who is a 5-2 market leader for the Curragh although she is also among the favourites for the English Guineas.

However, the opportunity to use the French Guineas option for one or more of them appears to be disappearing with the French ban on overseas runners looking set to be extended.

“It’s looking doubtful that France will open up for their Guineas and then we will work out whether some go to England and some stay in Ireland. The next week will show us where we are going,” Harrington said.

She said the 14 day self-isolation regulation is a complicating factor in terms of people returning to the country but underlined how unusual the circumstances are.

“We don’t really know what’s happening from one day to the next. This is a very moveable feast,” Harrington said.

“They (HRI) are probably right to have the Irish Guineas when they are, and keep the Derby and the Oaks at the right time, because it gets the season back on the right leg,” she added.