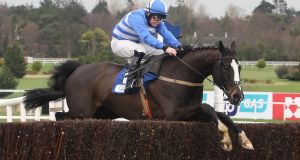 The Willie Mullins duo of Ballycasey and Alelchi Inois head the weights for the Randox Health Topham Chase at Aintree next week.

Mullins was last successful in the two-mile-five race over the National fences with Time For A Win in 2002, although Alelchi Inois is thought more likely to wait for the Grand National 24 hours later.

“The plan is to come over to Aintree with Mr Diablo. It was a good performance to win off top-weight at Leopardstown and he schooled over the National-style fences at the Curragh last Friday, which went well,” said Dempsey.

“We put a tongue-tie on him last time, although I am not sure how much of a difference it made. He has never had a wind issue and is a good horse on his day, but it certainly won’t do any harm to put it on again.

“He was second in a €100,000 chase at Punchestown last year, when he had some very good horses behind him including the Galway Plate winner Lord Scoundrel, but then he got a bad cut on a tendon when he ran at Roscommon.

“He has won on all sorts of ground and he’s a good moving horse. He has mixed it with some of the best around at times and you would like to dream he could be a National horse one day.”