Kieren Fallon to reveal all in his new autobiography 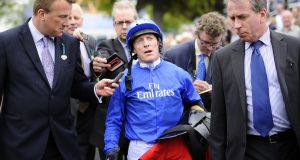 Kieren Fallon: “It was a great weekend, the Arc. A great Sunday, and on Monday morning we’re walking into the Old Bailey looking at six to 10 years.” Photograph: Alan Crowhurst/Getty Images

Kieren Fallon, whose brilliant and colourful career has been a thread in Flat racing’s narrative for a quarter of a century, is preparing to give a full personal account of his life both in and out of the saddle in an autobiography to be published this year.

A spokesman in the publicity department of Simon & Schuster, the book’s publisher, confirmed yesterday that Fallon’s book will be called Insolence and is due to be published in September.

It has been written in collaboration with Paul Haigh, a former senior columnist for the Racing Post, and will be the first about Fallon’s life and career with which Fallon himself has collaborated.

Insolence promises to be the most eagerly awaited racing autobiography for many years, since few riders in turf history have experienced as many highs and lows as the six-times former champion.

Fallon’s achievements in the saddle mark him out as one of the greatest jockeys of the post-War era. His big-race wins included three victories in the Derby among a total of 16 English Classic successes, and he was widely seen as one the finest riders of Epsom’s unique turns and gradients in the track’s long history.

He also rode for the greatest trainers of the past 30 years, during a career which included spells as stable jockey to Aidan O’Brien, Michael Stoute and the late Henry Cecil.

Fallon’s most notorious spell in the public spotlight, however, again mingled triumph with personal calamity. His second Arc victory was followed immediately by his trial on race-fixing charges, which collapsed just over two months later when the presiding judge decided that there was no worthwhile case to answer.

No sooner had Fallon walked free from the Old Bailey than details emerged of his second positive test for cocaine, and he was banned for 18 months in January 2008. He lost his position as stable jockey to O’Brien, and big-race winners were much more difficult to come by following his return to the saddle.

Fallon did, however, manage to add one more English Classic to his record, thanks to the 40-1 success of Night Of Thunder in the 2014 2,000 Guineas.

Fallon announced his retirement from the saddle in July 2016 as a result of an ongoing struggle with depression, an illness which Dr Adrian McGoldrick, the chief medical officer to the Irish Turf Club, said at the time might have gone undiagnosed for several years.

Since then, he has disappeared from view as far as most racing fans are concerned, but in a rare interview recently he discussed the weekend in the autumn of 2007 when he went from winning the Prix de l’Arc de Triomphe aboard Dylan Thomas directly to the dock at the Old Bailey in London to stand trial on race-fixing charges.

“It was a great weekend, the Arc,” he said. “A great Sunday, and on Monday morning we’re walking into the Old Bailey looking at six to 10 years, and nine weeks at the Old Bailey, that was tough for something we never done.

“There was nothing we could do either, obviously the police took it and you can’t take on the police. When it comes out, which it will shortly, about some of the stuff that went on in there, how wrong it was ? My career was in tatters and it never recovered afterwards, that was the end.”

Fallon’s reference to the truth coming out “shortly” can now be seen as a reference his forthcoming book. He is understood to have relished the opportunity to tell his own story, and racing fans can look forward to a fascinating personal account of one of the most successful and turbulent careers in any sport.

Meanwhile, Supreme Novices’ Hurdle hero Labaik is set to go under the hammer at the Goffs UK Aintree Sale next Thursday.

The previously recalcitrant grey put his best foot forward to run out a smart winner of the Cheltenham Festival curtain-raiser and will now be offered at the inaugural sale at Aintree, which takes place in the winner’s enclosure after racing on the opening day of the Grand National meeting.