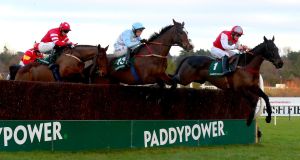 Stellar Notion in action at Leopardstown: Henry De Bromhead has confirmed he will contest the world’s most famous steeplechase at Aintree. Photograph: James Crombie/Inpho

Grand National contender Stellar Notion is set to spearhead a formidable team for Henry de Bromhead at Aintree next week.

Stellar Notion, who was last seen finishing a close second in January’s Leopardstown Handicap Chase, also holds an entry over the National fences in the shorter Topham Chase, but his trainer has confirmed he will contest the world’s most famous steeplechase.

His Grade One-winning stablemate Identity Thief, meanwhile, could revert to the smaller obstacles in Thursday’s Betway Aintree Hurdle. The seven-year-old made a flying start to his chasing career with successive wins at Punchestown, but has been disappointing since.

De Bromhead said: “Stellar Notion is in the National and will run in that. Identity Thief is entered in the two-and-a-half-mile hurdle [Aintree Hurdle] and we’ll have a look at that. I think we have to go back over hurdles with him after his last couple of runs over fences and try to get his confidence back.

“Sub Lieutenant will be entered in the Bowl and the Melling Chase. Alisier D’Irlande is in the two-mile handicap [Red Rum Chase].”

“Petit Mouchoir will wait for Punchestown. He’s in great form and we’ll keep him for there,” the trainer added.

“Champagne West will wait for the Gold Cup in Punchestown. Looking at the way he ran in Cheltenham I’d say an ease in the ground wouldn’t do him any harm. He seems in mighty form.”

Derby-winning jockey Martin Dwyer, meanwhile, is thrilled to have been granted a jumps licence so he can ride at next week’s Grand National meeting.

Dwyer is set to partner the Iain Jardine-trained Loud And Clear in the Grade Two bumper in honour of his later father. Loud And Clear, a game winner at Ayr in October, is owned by the Tapas Partnership, a syndicate made up of some of the Dwyer family’s close friends.

The rider’s father, Martin snr, died in January, aged 63, and was largely responsible for Dwyer, who won the Derby aboard Sir Percy in 2006, becoming a jockey.

Dwyer said: “I got confirmation of the jumps licence on Tuesday and I’m really looking forward to going to Aintree.

“Loud And Clear is owned by a bunch of mates and I think it was actually the night of my dad’s funeral that they told me they had this horse going to Aintree and asked if I’d like to ride him.”

While riding under National Hunt rules for the first time excites Dwyer, he has no plans to make it a regular thing. He added: “I can’t see myself riding over hurdles, but I could ride in bumpers, I suppose, but we’ll just have to see how it goes.

“The partnership that own him have horses on the Flat that I ride and they do have a few store horses coming through as well.”