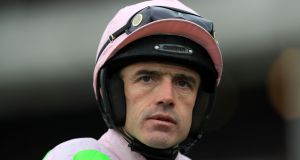 Ruby Walsh is set to partner Pleasant Company in the Randox Health Grand National at Aintree on Saturday week.

Willie Mullins has five entries for this year’s renewal but Walsh is set to side with the Bobbyjo Chase winner.

Mullins also has Alechi Inois guaranteed a run, but Sambremont, Polidam and The Crafty Butcher all seem unlikely to make the cut.

Walsh, who has won the National aboard Papillon (2000) and Hedgehunter (2005), told At The Races: “I’d imagine I’ll ride Pleasant Company.

“Alechi (Inois) looks to have an awful lot of weight (11st 7lb). It’s probably a summer mark he has more than a winter mark.

“The others of ours from 55 downwards, will they get in? It’s touch and go.”

Despite Michael O’Leary’s well-publicised spat with British Horseracing Authority chief handicapper Phil Smith following the publication of the weights, his Gigginstown House Stud operation is still set to be well represented in the Grand National.

Almost as soon as the weights were released, Gigginstown-owned top-weight Outlander was ruled out, shortly followed by leading fancy Don Poli, but the team could still have a strong hand.

Gigginstown racing manager Eddie O’Leary told the Irish Independent: “We may run Thunder And Roses, Rogue Angel, Wounded Warrior, Measure Of My Dreams and Roi Des Francs in the National.

“We’re looking to run Empire Of Dirt And Outlander in the Aintree Bowl, though they’ve it to prove after Cheltenham.”