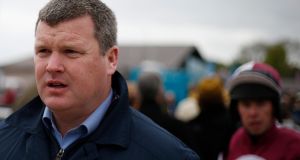 Top jumps trainer Gordon Elliott proved his versatility as he recorded a first ever two-year-old winner in saddling Beckford to make a successful debut in the Foran Equine Irish European Breeders Fund Auction Maiden at the Curragh.

The son of Bated Breath quickened to lead inside the final quarter-mile and Declan McDonogh drove him out to beat Red Persian by three-quarters of a length.

Elliott said of his 10-1 scorer: “That’s my first two-year-old winner and I’m not sure if I’ve even had a two-year-old runner before. It’s also my first winner at the Curragh.

“I was nervous beforehand as I’d never had a two-year-old winner, but all his work was good and Declan had ridden him at home. I’ve three or four two-year-olds that I like and he is one of them.

“There are 20 in the syndicate and they are from Ireland and England.”