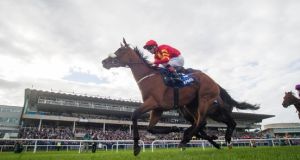 International questions this weekend revolve around the chances of a Guineas double for Aidan O’Brien in France and Zhukova kick-starting Dermot Weld’s season in New York. But there’s a positive answer already to the local query about enough shelter being in place for everyone at the Curragh if it rains.

The logistics of racing at the Curragh during its two year €70 million redevelopment will be tested when the first fixtures of a restricted season take place with temporary facilities on Saturday and Sunday.

With rain forecast, and curiosity possibly propelling racegoers to check out progress of the flagship development at Irish racing’s HQ, the Curragh’s chief executive Derek McGrath anticipates the track’s almost exclusively temporary facilities will prove more than up to the job.

“I’m confident people will be happy with what they see here,” said McGrath who pointed out that the 1,500 capacity stands are covered and that a public hall can facilitate 700 people at the one time. He also confirmed the bottom level of a two-storey marquee will be open to the public if required.

Dermot Weld trains a couple of hundred metres from the Curragh track and has given the arrangements a thumbs up.

“I’m very satisfied with the facilities from what I saw during the week and I hope they’re well received by the public,” he said although his own focus will be 3,000 miles away in New York when Zhukova lines up in the Grade 1 Man O’War Stakes at Belmont Park at 10.13 on Saturday night.

The high-class mare will be ridden by last week’s Kentucky Derby winning jockey, Johnny Velazquez, in an eight runner field. Zhukova carries bottom-weight of 8st and is 5-1 in morning line betting.

Victory could be a sign of an upswing in Weld’s fortunes after a noticeably low-key start to the 2017 season so far. The powerful stable has produced just eight winners, the last of them over two weeks ago.

“My horses have had head colds, no more and no less, so we will be a bit quiet runners-wise until I’m happy with them again. Consequently I’ve only a couple of runners for the Curragh but after a week or so we’ll be back in full swing,” he predicted confidently on Friday.

In contrast the Ballydoyle team has been in notably good form with Cliffs Of Moher securing the latest Derby trial in Friday’s Dee Stakes at Chester. Sir John Lavery will be next to put his blue riband credentials on the line in Saturday’s Lingfield Derby Trial.

Ryan Moore has opted to ride Peace Envoy who endured a luckless passage when only fourth in the Tetrarch Stakes at Naas. Seamus Heffernan will be on Orderofthegarter in a 15-strong field due off at 3.15 Irish time.

Moore skips the French 1,000 to team up with Sir John Lavery at Lingfield and that leaves Winter’s jockey Wayne Lordan with another class shot on Rain Goddess. Donnacha O’Brien will be on Roly Poly while Padraig Beggy is declared for this week’s Dundalk maiden winner Smoulder.

Saturday’s Group 3 Curragh feature is the Blue Wind Stakes which looks a good opportunity for Laganore to confirm Gowran places with the supplemented Beautiful Morning. Ballydoyle field a pair of three year olds against the older fillies.

Pat Smullen’s strike-rate has taken a dip with the lack-lustre form shown by the Weld team but he’s a noteworthy booking for Night Of Glory who belied 33-1 odds with a fine second under an apprentice on his Navan debut behind Chronicles.