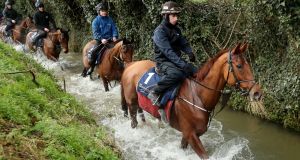 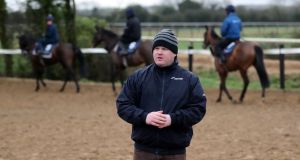 Gordon Elliott: “It’s something you dream about since you’re young, to be champion trainer.” Photograph: Niall Carson/PA

The facilities Gordon Elliott has to train his 170 horses in Co Meath are notably lavish but little details suggest why he and the Ryanair boss Michael O’Leary are a match made in racing heaven.

Horses being washed down after their Tuesday morning exercise had water removed not by patented sweat scrapers but improvised bits of plastic which looked to have been cut out of old five-gallon drums.

At the same time other animals on the horse-walker kept warm under rugs bearing the names of sponsored races won in the past and recycled for everyday use: Cullentra House has every kind of pristine surface and gallop available, but fancy for its own sake it isn’t.

Elliott’s empire is flush but functional, with one aim – success.

Since O’Leary has a policy of rewarding success with more horses, it’s little wonder then he has hitched the Gigginstown Stud wagon even more firmly to a man who will be 39 on Thursday and whose rise to fame and fortune over the last decade has been meteoric.

O’Leary’s September split from Willie Mullins resulted in a further influx of talent and over 1,000 runners have come off the Elliott assembly-line already this season. He anticipates his most in-depth Cheltenham raiding party to date with up to 30 runners.

They include Outlander and Don Poli, who will attempt to emulate last year’s Gold Cup success by the now retired Don Cossack, and Tombstone who is set to be supplemented into the Champion Hurdle.

Apart from the bumper, Elliott expects to have a runner in practically all of the 27 other races, including many people’s idea of a festival banker, the hugely exciting novice, Death Duty.

But it is testament to public fascination with O’Leary, his training-fee row with Mullins, and the consequent impact on Elliott’s chances of dethroning the perennial champion in this season’s title race, that a Cheltenham media morning still gets drawn inexorably towards the young pretender’s chances of becoming Ireland’s champion trainer.

“Absolutely no chance,” Elliott said, repeating the mantra he has adopted all season which nevertheless doesn’t appear to be fooling bookmakers anymore.

They make him a 2-5 favourite. Even Mullins has conceded he needs to win the lucrative Irish National – and his rival finish out of the money – just to draw level. Since Elliott plans to make 30 Irish National entries, that’s unlikely.

So when the question came about whether he would rather win the Gold Cup again, or land a trainers title, the burly figure displayed some nimble verbal footwork which managed not to pin him down to any either/or scenario.

“It’s something you dream about since you are young, to be champion trainer. And Of course I think about it. But it’s not something I’m going to talk about until the final day of Punchestown,” he concluded.

If he does win it, O’Leary leaving Mullins could prove to have been a critical factor. The businessman has been fickle in his patronage of some other trainers but remains Elliott’s biggest supporter.

“I started training for them [Gigginstown] seven or eight years ago and there’s never been any problem. I’m straight with them and they’re straight with me. We have our disagreements and they don’t always agree with my opinion. But if you work hard and try your best, you’ll be okay,” said the trainer, almost 50 per cent of whose Cheltenham team consists of Gigginstown horses.

Absent however will be the Gold Cup hero Don Cossack whose return to action was scuppered by a leg problem – “If it had happened before Cheltenham last year, I’d have been gutted: but at least he’s retired a Gold Cup winner and a champion.”

Elliott was famously chided by O’Leary for effusively praising the young Don Cossack and many punters have latched on to the trainer publicly praising Death Duty as possibly a better hurdles performer than the former star. Already a Grade One winner, he is a strong favourite for the Albert Bartlett on festival’s final day.

“I’ve said from flag-fall that’s the race he’ll go for. He probably is a better hurdler than Don Cossack was at the same stage on form but he still has to go and do it when he goes chasing. Nothing fazes him. He’s very laidback and they’re normally the best ones,” Elliott said.

Half of Elliott’s festival team are contenders to run in handicaps so no one will be awaiting Wednesday’s announcement of festival weights more. However Automated has already been significantly cut in ante-post betting for the Coral Cup, a race Elliott has won twice already, including last year with Diamond King.

However the Gold Cup remains the ultimate and it’s hardly beyond the bounds of possibility that the Elliott-Mullins dynamic winds up dominating steeplechasing’s blue-riband too.

“Native River would be the one from England I’d fear,” said Elliott. “But there isn’t much between the Irish ones. Djakadam is going to be fresh. But we beat him in the Lexus. So we’ll see.”

As a functional summation it was impossible to knock: and it could yet leave more than just the trainer feeling flush.

“He has surprised me. At home he doesn’t do anything fancy but he’s improving with each run. He’s not a Don Cossack but the way he’ll be ridden will suit. We’ll drop him in and take our time.”

“Unless something happens to Outlander or Don Poli, he will run in the Ryanair. A Gold Cup is a Gold Cup but we have two for that. He looks like he has a chance.”

Tombstone (Champion Hurdle)
“I’m not saying he’s good enough to win a Champion Hurdle but when you see Petit Mouchoir is third favourite, he was well beaten by Tombstone in the Supreme last year. I’ve never had a runner in the Champion Hurdle so I don’t know what it will take to win one. But I think he’s not a bad horse.”

Apple’s Jade (OLGB Mares Hurdle)
“I’d be delighted if Limini went down the Champion Hurdle route but if not we’ll take her on again. I’d say she will definitely come on from her last run. If we could get a lead, something to take her there, I’d be happier.”

“He’s won a Grade One and I’d say cheek-pieces made a big difference to him last time rather than the ground. We’ll ride him positively. You’d think he was a three mile chaser at home.”