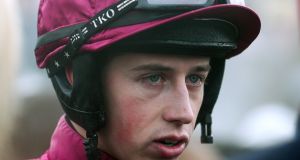 Dinaria Des Obeaux justified odds-on favouritism in the Winning Fair Juvenile Hurdle at Fairyhouse – but only after a stewards’ inquiry.

Gordon Elliott’s charge was sent off at 10-11 for the Grade Three contest and was at the head of affairs for much of the race, though Ex Patriot swept ahead approaching the last in the hands of Davy Russell.

Bryan Cooper was forced to switch Dinaris Des Obeaux out as Ex Patriot cut across her, and was gaining with every stride heading to the finish, missing out by a head.

The stewards then deemed the interference caused by Ex Patriot to be enough to reverse the placings, giving the win to Elliott’s mare.

Elliott said: “She’s a grand, honest mare that stays. She definitely got impeded and it’s unfortunate for the connections of the second. We got a bit of luck today, but they are two nice horses.

“I wouldn’t say it was the strongest race in the world, so I don’t know whether she’ll be going to Cheltenham.”

Speaking before the demotion of her 5-1 chance, Ex Patriot’s trainer Ellmarie Holden said: “That was unbelievable, absolutely super. It’s his third run and he just keeps improving every time.

“He’s just enthusiastic about the whole thing and loving it. He’s getting sharper every time with his jumping.

“I wasn’t too disappointed at Leopardstown as he still ran very well for his second run.

“We’ll decide during the week now about Cheltenham. We’ll see how he comes out of it.

“Davy said he was super and said the trip and ground were perfect.

“He seems to go on that ground. On his first run we were a bit concerned because we thought he might like nicer ground, so nicer ground wouldn’t worry us either.”

Willie Mullins and Ruby Walsh landed the At The Races Bobbyjo Chase for the fourth time in the last six years as Pleasant Company got up late to take the Grade Three prize.

Thunder And Roses was locked together with Baie Des Iles at the head of affairs and they had pulled well clear five out, where Walsh started to pick off his rivals from the back of the field.

The 9-4 favourite relentlessly ate into the lead up the home straight and after jumping the last less than a length behind, he found more up the run-in to score by half a length.

Mullins said: “It was hard-fought. Ruby said he was going to sit quiet on him today and try be there at the business end. That’s exactly what happened.

“It’s very, very tough going and ground I think that he doesn’t like in particular, so it’s fortunate to get a win like that on that ground.

“He’s in Aintree (Randox Health Grand National) and that would be his owner’s preferred option, so that’s probably where he goes. Obviously I’ll enter him in the Irish National here being a course winner, but I’d imagine it’s Aintree.

“I’d imagine he won’t be going to Cheltenham.”

1 Bryson DeChambeau trainer insists muscle gain is not down to steroids
2 Paul Stirling’s heart over head decision to play on for Ireland bears fruit
3 Owens’s comments increase tensions ahead of FAI senior council meeting
4 Leo Cullen says rotation will be key as Leinster look to keep on winning
5 America at Large: When not taking one for the team is the wisest course of action
Real news has value SUBSCRIBE

‘Slim to no chance’ of Nick Kyrgios playing in French Open due to Covid-19 fears 09:27
Bryson DeChambeau trainer insists muscle gain is not down to steroids 09:05
Golf Majors return with US PGA, Man United progress in Europe 07:39
Sporting Cathedrals: Le Stadium - European fortress of the mighty Toulouse 06:00
Joanne O’Riordan: Why doesn’t streaming bonanza extend to women’s sport? 06:00
Here is your handy guide to sport on television this week