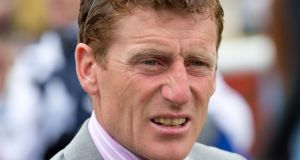 Trainer Johnny Murtagh was hit with a €2,000 penalty over the running and riding of Tobacco Bay at Dundalk on Friday night. Photograph: Morgan Treacy/Inpho

Johnny Murtagh has decided not to appeal the €2,000 penalty he picked up over the running and riding of Tobacco Bay in Dundalk on Friday night.

As well as the trainer’s fine, the Paul Smith-owned Tobacco Bay was suspended from racing for 42 days after finishing fifth in a maiden won by Zinat, with jockey Seamus Heffernan receiving a five-day ban.

It was the most high-profile case to date under the Turf Club’s new “running and riding” regulations brought in just over a month ago.

As part of the new Rule 212 regulation, there is an “overall obligation on all persons who may have involvement with the running and riding of a horse in a race to ensure that the horse concerned runs on its merits and is also seen, to a reasonable and informed member of the racing public, to have run on its merits.”

On Friday night the stewards examined the running and riding of Tobacco Bay and multiple classic winner Heffernan explained in the inquiry that he did not resort to the whip as he felt the filly was trying her best and also tiring even though she stayed on, helped by keeping his riding style in rhythm with the filly.

Murtagh, acclaimed as one of the greatest jockeys in Irish racing and now a successful trainer, said his instructions to Heffernan were to drop the filly out, get her to relax and do his best. He also said a lack of opportunities at six or seven furlongs had forced him to run Tobacco Bay at a mile.

However, the stewards concluded there had been a breach of Rule 212(ii) and further ordered Heffernan forfeit his riding fee.

Although it is currently unclear if Heffernan will appeal his ban, Murtagh confirmed on Sunday he won’t appeal and that owner, Paul Smith, son of the Coolmore Stud partner, Derrick Smith, and whose colours were carried to 2013 St Leger success by Kingston Hill, won’t lodge an appeal against Tobacco Bay’s suspension.

“I’ve spoken to the owner and while he’s disappointed at what happened he was happy with the run, going by the reports I’d been giving him before the race,” Murtagh said. “She hadn’t been showing much at home. She’s light and weak and couldn’t take much work.”

“I gave Seamus his instructions and I was delighted with the run. My horses haven’t been running that well. Seamus was adamant she was doing her best and staying on but with the new rules it seems you have to be seen to be more vigorous,” he added.

“The Jockey Association has said it has concerns about aspects of the new running and riding rules and spokesman Andrew Coonan pointed in particular to the Look Closer appeal earlier this month when a five-day ban for jockey Rachel Blackmore and trainer Ellmarie Holden’s €2,000 fine were confirmed.

“What is coming out of inquiries is a concern about the ‘reasonable man’ test. The difficulty we have, and particularly in the Blackmore-Holden case, is that no one in the stands, or in the stewards room, can tell what a jockey is feeling at a particular time,” Coonan said .

“Racing has to be seen, in a fair and reasonable manner, to protect the integrity of the sport. But it has a duty to protect the animal, and the rider, as well.

“It’s the jockey’s instinct, and what they’re paid to do, to protect the best interests of a horse and in particular circumstances, such as feeling a stride shortening, or feeling a horse is lame, not to press on. In those circumstances they can now be penalised and that can’t be correct,” he added.