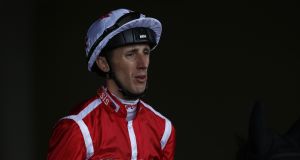 Jockey George Baker was airlifted to hospital after a fall at St Moritz. Photograph: Getty Images

Classic-winning jockey George Baker was in intensive care in Switzerland after be was airlifted to hospital on Sunday after a fall at St Moritz.

Baker, who won the St Leger in September on Harbour Law, was riding Boomerang Bob for Jamie Osborne on the frozen lake track in Switzerland when the horse was brought down and fatally injured in the first race of the day.

Three horses came down in the incident but the other two and both of their riders escaped injury.

Baker was taken to a trauma hospital in Chur and the rest of the meeting was abandoned.

Baker’s agent, Guy Jewell, said: “George is in intensive care at the hospital.

“The one bit of good news so far is that he has already had a CT scan and that has come back clear.

“Now all we can do is wait for the medication to wear off.”

Speaking after the incident, St Moritz press officer Claudia Grasern-Woehrle said: “We’ve had a bad accident in the first race.

“The jockey George Baker was brought down. Unfortunately his horse died and the jockey has been airlifted to hospital.

“We checked the track following the incident and we have found a hole in it, which means we have had to cancel the rest of the meeting as safety comes first.”