Colin Tizzard confirms Thistlecrack ruled out for the season 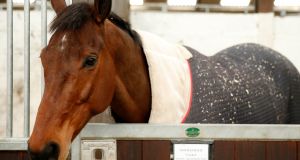 Thistlecrack: The King George VI Chase winner won’t be featuring at Cheltenham due to a torn tendon and has been ruled out of action for the season by trainer Colin Tizzard. Photograph: Matthew Childs/Livepic/Reuters

Colin Tizzard has reiterated that Thistlecrack will not run in the Timico Cheltenham Gold Cup.

The King George VI Chase winner was ruled out of the Cheltenham Festival last week with a torn tendon, but mention at the weekend of a second scan set for this week led to some speculation and his price collapsing on the betting exchanges on Sunday night.

However, Tizzard never mooted the possibility of him running in the blue riband, with a second scan on a tendon injury being common practice among trainers to assess the full extent of the damage once an injured leg has had chance to settle down.

In a statement on Tuesday afternoon, Tizzard said: “Thistlecrack’s second scan came back exactly the same as the first, as we expected it would.

“As communicated previously, Thistlecrack will not run again this season and all being well we’d expect him to be back at Christmas.”

Willie Mullins feels JCB Triumph Hurdle hope Meri Devie can improve significantly on her last run. The filly, who was beaten less than five lengths in a Group One on the Flat, finished fourth in the Spring Juvenile behind Mega Fortune and stablemate Bapaume.

Ruby Walsh will once again have the difficult choice of choosing between the Mullins pair.

“Bapaume and Meri Devie are two nice ones to have. I don’t think Dandy Mag will go,” said Mullins.

“I haven’t given her a day off since, she’s in good order and she’s growing and putting on weight.

“I know Ruby had huge time for her before the last day and I sort of made him ride Bapaume and he wanted to ride her. She’s not out of it by any means. I think Bapaume can improve. He’ll need to find more to win.”

Ben Pauling is slightly favouring the Neptune Novices’ Hurdle for Willoughby Court at Cheltenham but has stressed no final decision has been made.

The Paul and Clare Rooney-owned six-year-old was a hugely impressive winner of a Grade Two at Warwick in January over the trip of the two-mile-five-furlong trip of the Neptune.

He is a marginally shorter price for the Albert Bartlett over three miles at 14-1 compared to the 16-1 he can be readily backed at in the Neptune, and it may come down to the ground.

“Willoughby Court is in very good order, I’m very happy with him, like I am all my Cheltenham horses,” said Pauling.

“No decision has been made yet, but I suppose I’m slightly leaning towards the Neptune at the moment, unless the ground came up quite quick.”