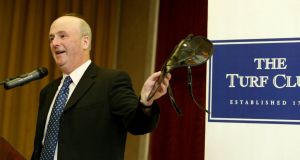 Both the Turf Club and the Irish Thoroughbred Breeders Association agree a protocol to allow racing’s regulatory body carry out drug testing on stud farms could be in place within weeks.

Such a protocol was a central recommendation of last year’s Anti-Doping Task Force report but negotiations between the Turf Club and the ITBA, which claims its members own 90 per cent of the country’s foal population, appeared to have stalled over a number of elements.

They include the issue of notice, if any, that ITBA members should get ahead of official carrying out testing and whether Turf Club inspections should be random or intelligence led.

However a midweek meeting has been described as “productive” by the Turf Club CEO Denis Egan and by the ITBA spokesman, Shane O’Dwyer.

“It was a very productive meeting and we have agreed on broad principles. We need to work out some fine details but I would imagine that will happen in the next few weeks,” O’Dwyer said. “At that stage it wouldn’t be appropriate to disclose anymore.”

In racing news, Co Dublin trainer Patrick Griffin is hoping the veteran stayer Portrait King can repeat his 2012 victory in the four-miles plus Betfred Eider Chase at Newcastle on Saturday.

The 12 year old was third to Rocking Blues in last year’s Eider and will be making his fourth cross-channel appearance in five starts this season, the last of them over hurdles at Ayr a month ago.

“We hope it’s as heavy as they say it is as he loves a real stamina test,” Oldtown based Griffin said. “We did want to travel Thursday but because of the storm that was out of the question: it was a case of survival, not travel. But it’s all calmed down in time.”

Griffin also runs his Catterick winner Aminabad  in a novice chase on the Newcastle card while Co Antrim based Stuart Crawford runs Elusive Theatre in a later novice hurdle.

Further afield, the former French champion jockey Thierry Jarnet, one of a select group of just seven jockeys to win the Prix de l’Arc de Triomphe on four occasions, has confirmed his retirement.

The 49-year-old has blamed a knee problem for forcing time on his career in the saddle which saw him champion jockey in France from 1992 to 1995 while riding for Andre Fabre.

For Fabre he won the Arc twice on Subotica (1992)and Carneige (1994) but will be best remembered for his association with the duel-Arc heroine Treve in 2013-14.