Barry Geraghty ruled out of Cheltenham Festival after fall 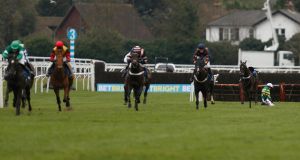 Barry Geraghty kneels on the ground after his fall from Charli Parcs at Kempton Park on Saturday. The Irish jockey has been ruled out of the Cheltenham Festival. Photograph: Alan Crowhurst/Getty Images

News that Barry Geraghty will miss this year’s Cheltenham Festival leaves the JP McManus team with a logistical headache in terms of who will replace the Irishman, and it will hardly ease any wider anxiety throughout the sport over the next fortnight.

Confirmation that a fall at Kempton on Saturday has left Geraghty with five fractured ribs and a partially collapsed lung means one of Cheltenham’s stalwart figures has been ruled out of festival calculations.

Among jockeys riding now, only Ruby Walsh can trump Geraghty’s haul of 34 festival winners and the 37-year-old has had at least one Cheltenham victory every year since 2002.

The Turf Club’s medical officer, Dr Adrian McGoldrick, confirmed: “Barry has fractured five ribs so he’s gone for four to six weeks I would imagine. He’s out of Cheltenham. Perhaps he’ll be able to make it back for Aintree.”

Geraghty had had the enviable pick of JP McManus’s festival string, including the choice of Buveur D’Air and Yanworth in the Champion Hurdle as well as the mount on the Stayers Hurdle favourite Unowhatimeanharry.

“Noel Fehily had been on standby to ride Buveur D’Air if Barry had chosen Yanworth,” said McManus’s racing manager Frank Berry. “I would imagine Mark Walsh will come in for a few as well but we’ll have to see.”

Saturday’s spill immediately cost Geraghty a winner on Sunday when Robbie Power successfully substituted on the topweight Edwulf in the Nas Na Riogh Handicap Chase at Naas. However, that was a minor blow compared to missing a festival around which the season revolves and which is now just two weeks away.

Sunday’s Naas action was labelled a “Festival Trials” day but the vast majority of the big guns have already earned their cross-channel tickets and Geraghty’s mishap will leave many connections keeping their fingers even more tightly crossed that nothing happens to prevent travel plans.

Michael O’Leary claims to hate this eve-of festival tension and the Ryanair boss’s brother, Eddie, caught the mood of nervous anxiety about unwanted late phone calls when conceding on Sunday: “It can be nerve-wrecking – every morning you get past 9.30 is a good day.”

This Naas fixture inevitably gets viewed through a Cheltenham prism and although the Gordon Elliott-Gigginstown combination scored with a first and last race double with Morgan and Monbeg Worldwide, just as much attention was given to some pre-festival interviews over the racecourse close-circuit.

Pressed as to which of Gigginstown’s hugely powerful team constituted their best chance, Eddie O’Leary quickly nominated Death Duty in the Albert Bartlett, an enthusiasm notably at odds with his view of the four-mile National Hunt Chase favourite, A Genie In A Bottle – “good, big, honest and slow!”

The Gigginstown squad will be added to when Tombstone is supplemented into the Champion Hurdle and it also includes both Gold Cup hopes Outlander and Don Poli which O’Leary described as having “small chances”.

Significantly he nominated Djakadam as his idea of a likely “blue-riband’ winner – “He’s a very, very high class horse and he’s the winner as far as I’m concerned.”

One horse that bucked the trend and successfully used Sunday as a festival trial was Forge Meadow, who will be put into the Dawn Run Mares Novices event after securing an impressive Grade Two victory in the Paddy Power Novice Hurdle.

Bookmaker reaction was to cut the winner to 10-1 for the two-mile event after Forge Meadow gave trainer Jessica Harrington, 70 on Saturday, a belated birthday present.

“I was worried about the ground here and she needs to relax more but better ground and a good pace at Cheltenham will help her,” said Harrington whose festival team of up to eight horses will include the Gold Cup contender Sizing John.

Forge Meadow completed a double for Power who had earlier scored on Edwulf and the jockey didn’t provide particular encouragement for those willing to trade at 6-1 about the horse’s chance against A Genie In A Bottle in the four-miler.

The Joseph O’Brien-trained horse has fallen a number of times this season and Power said: “I rode him over three miles on New Year’s Eve and two and a half suits him. They go quicker so there isn’t time for him to think about it.”

David Mullins was also on the double, scoring twice for Henry De Bromhead, including on Alisier D’Irlande who made all to land the Grade Three Chase. That prompted some bookmakers to make him a 25-1 shot against Douvan in Cheltenham’s two-mile championship.

Mullins had earlier completed a hat-trick on the quirky mare Adreamstillalive in the handicap hurdle, while David Splaine scored on Mick The Jiver in the handicap chase.