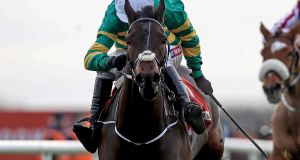 Landofhopeandglory: faces the task of conceding a stone to Dinaria Des Obeaux in the Winning Fair Hurdle at Fairyhouse. Photograph: Donall Farmer/Inpho

Sunday’s Naas card is billed as ‘Festival Trials Day’ but Saturday’s Grade Three opener at Fairyhouse could have the most Cheltenham significance with Michael O’Leary’s Dinaria Des Obeaux trying to make the most of a hefty weight concession from the JP McManus-owned Landofhopeandglory.

Not surprisingly, jump racing’s two superpower owners dominate betting for the leading owner prize up for grabs for the first time at Cheltenham in less than three weeks’ time.

McManus is a heavy 2-7 favourite with some bookmakers to edge out his great rival (7-2) for the new Irish Thoroughbred Marketing-sponsored award but it is O’Leary who looks to hold an edge in Saturday’s Winning Fair Hurdle at Fairyhouse.

The visual impression left by Dinaria Des Obeaux on her Irish debut at Cork in December meant her subsequent Grade One third to stable companion Mega Fortune represented something of an anti-climax.

However she retains a number of festival options, including the Triumph Hurdle for which she’s a 12-1 shot, while Landofhopeandglory is 20-1 for that four year old championship.

It’s in such a context that Landofhopeandglory’s immediate task of trying to concede a stone to Dinaria Des Obeaux looks difficult, especially since the ex-Ballydoyle runner will in all likelihood be much more effective on better ground.

Fairyhouse’s other Grade Three, the At The Races Bobbyjo Chase, traditionally holds more Grand National significance although the 2014 winner On His Own was only just denied by Lord Windermere in a controversial Gold Cup finish just a few weeks afterwards.

Lord Windermere’s appearance now is a timely tie-in to that and it will be fascinating to examine the impact, if any, of first-time cheek-pieces on the former Gold Cup hero, plus a number of other hopefuls at Naas a day later.

Jim Culloty has opted for the restrictive rear-vision devices on his stable stalwart who on figures holds a sound chance of winning for the first time since that memorable Gold Cup despite a lacklustre effort in the Lexus over Christmas.

Perhaps allowances could be made then for a ‘bounce’ element following his encouraging Thurles effort after a long layoff but three miles-plus on heavy ground will still be a major test for the veteran.

Mullins could also score in the bumper with Fulham Road who has had a hefty home reputation for some time and may be more at home in the testing conditions than the Shadwell-bred point to point winner, Empire Burlesque.

With the unbeaten Any Second Now not going to Cheltenham, the most significant festival trial at Naas could be Edwulf’s performance in the €50,000 Nas Na Riogh Chase.

The McManus owned runner is 14-1 for the four-miler at Cheltenham although his latest jumping spill at Navan last Sunday suggests he might be a nerve-wrecking ride in that.

Barry Geraghty is reunited with Edwulf who carries top weight and surely would relish a longer trip. In contrast conditions and a left-handed track look good for Total Recall who represents the in-form Sandra Hughes-Roger Loughran team.

Geraghty rides Any Second Now for the first time in the Grade Two Paddy Power Novice Hurdle where first-time cheek-pieces are also applied to the hitherto mostly disappointing Peace News.

The Gigginstown runner was touted a potential top novice after winning at Cork but has failed to fire since and looked to run in snatches behind Let’s Dance last time. If the pieces focus his attention there could be still be significant untapped talent there.

Pieces are also on the English raider Just Cameron in the Grade Three Chase and, given his proven winning form on heavy ground, Micky Hammond’s runner should be a leading player.

On figures Just Cameron has an advantage over Michael O’Leary’s topweight, Clarcam, and given recent bruised feelings in relation to apparent discrepancies over Anglo-Irish handicapping, it’s interesting to see how the cross-channel runner also races here off his British Horseracing Authority mark of 149.

Time will tell if that’s a positive or negative.