Ger Lyons warns courses to focus on racing, not concerts 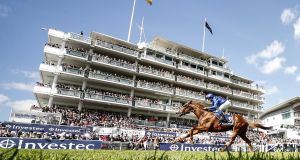 Top trainer Ger Lyons has warned racecourses in Ireland to “be careful what you wish for” in relation to concerts and urged the sport here to focus more on racing fans rather than boosting attendances through what he described as any “rent-a-crowd” policy.

Lyons’s comments come in the context of a number of incidents at racecourses in Britain recently, where outbreaks of fighting have occurred.

Incidents occurred at both Goodwood and Ascot last month, which attracted a lot of comment and attention in Britain and led to greater security measures being taken at other racecourses there since, including last week’s Derby festival at Epsom.

The English trainer Eve Johnson Houghton also called for designated drinking areas at racecourses after revealing an exchange she had with some racegoers at Salisbury last month.

Lyons has echoed her call to curb where people are allowed to carry alcohol during racing. He has also said the focus for racecourses here should be actual racing rather than concentrating on boosting attendances by other events.

“Racecourses have businesses to run,” he said on Tuesday. “But ultimately you’re either a racecourse or a concert venue. A racecourse is a racecourse first and foremost. Let’s put racing first. If the experts say there’s no harm in having a concert here and there, then grand: but not to the detriment of what we’re doing.

“I don’t want us to go down the road of what Ascot and Goodwood have seen in recent months. We’re coming dangerously close to falling into that category with our rock concerts etc.

“Eve Johnson Houghton spoke of what happened the other day in Salisbury and it transpired they were there watching football on the phone. I’ve had that over here, where the last thing in their heads is watching racing. And we don’t need that element coming into the sport.

“I don’t want it to be elitist. But I do want it to be about racing. I want to be surrounded by people who actually want to go racing.

“I’ve no interest in best-dressed lady competitions but the PR people say it adds bums on seats. But these bums on seats have no interest in the racing. I’d prefer a smaller crowd at the races that are there for racing rather than a large crowd where the majority aren’t even looking outside. They’re in the way of people who want to watch.”

A series of racecourse concerts will take place through the summer with Bulmers Live starting at Leopardstown on Thursday evening and running until August 16th. On Friday the Curragh hosts a concert as part of its Summer Sounds event.

Lyons said violence of the sort that happened at Ascot and Goodwood is “not an Irish thing – but be careful what you wish for because it soon will be if you keep demanding that attention or that crowd participation”.

He added that racing has a habit of shooting itself in the foot by not focusing on its real fan base.

“We should look after what we have, be comfortable with what we have, accept what we have and be careful what you wish for. Because do you want what Goodwood had the other day? Do you want to be walking into a racecourse in Ireland with sniffer dogs and police searching you?

“I find it hard enough to walk through an airport with that stuff, without having to do it at a racetrack.”

Separately Lyons described the chairmanship of Horse Racing Ireland as “probably a thankless job”, wishing Nicky Hartery well at the start of his new five-year tenure.

“I believe he’s a top-class businessman and he seems to be independent,” he said of the CRH chairman. “I think that’s very important. I think independence is the most important thing in a seat like that.”

Lyons is currently third in the trainer’s table behind Aidan O’Brien and Jessica Harrington after a successful start to the season, highlighted by a pair of Group Three victories for the filly Who’s Steph.

After her seventh to Alpha Centauri in the Irish Guineas, Who’s Steph is likely to be seen next in the Group Two Kilboy Estate Stakes at the Curragh next month.

Lyons has three entries at Wednesday’s Navan fixture, and the best of them could be the first-time blinkered Viscount Wilson, who can foil Rockfish’s attempt at four-in-a-row in the 10-furlong handicap.

Wexford’s Wednesday evening jumps action can see In a Pinch relish the quick ground conditions and follow up a recent Clonmel success.