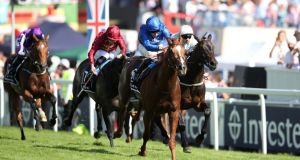 It took almost quarter of a century but Sheikh Mohammed’s dream of winning the Investec Epsom Derby in the blue colours of his Godolphin operation came through on Saturday with Masar.

The 16-1 winner provided jockey William Buick and trainer Charlie Appleby with a first Derby success after beating Dee Ex Bee (20-1) by a length and a half with the 6-1 shot Roaring Lion in third.

Aidan O’Brien’s Saxon Warrior started a heavily backed 4-5 favourite but could only finish a bitterly disappointing fourth after repeatedly encountering trouble in running up the straight.

If it hardly represented Ryan Moore’s finest hour in the saddle there was also no escaping how the big Irish hope never looked like launching a meaningful challenge once in the clear.

Saxon Warrior’s defeat means Coolmore’s own dream of landing the Triple Crown with an unbeaten colt lauded as potentially the best prospect ever through O’Brien’s hands was dashed.

And the significance of victory going instead to Coolmore’s traditional superpower rivals in Godolphin was lost on no one at Epsom.

Masar was third to Saxon Warrior in the 2,000 Guineas at Newmarket but an emphatic form reversal in the race that matters most of all has potential implications that will go far beyond Epsom.

Dormant for so long, and forced to play second fiddle to their great Irish based competition, this success may come to be regarded as the sweetest of all for Sheikh Mohammed.

Certainly any presumption of a coronation for Saxon Warrior was blown away as Masar carried the Godolphin blue to victory over Dee Ex Bee who is owned by the Sheikh’s son.

As family successes go it took some topping and Dubai’s ruler made a point of saying it was a victory for a horse who came from the tiny Gulf state to secure Derby glory at Epsom.

Such vindication has been a long time coming for a man whose dream of international racing domination from a Dubai base saw the Godolphin concept first begin in 1994.

Masar represents affirmation of almost 25 years of planning and investment running into billions.

It’s a project that originated before John Magnier installed Aidan O’Brien in Ballydoyle which in turn started a run of success that forced the Sheikh’s team to bend the knee in defeat far too often for comfort.

It was little wonder then if a win for colt by New Approach, who wintered in Dubai, and carried the famous blue colours, represented a landmark moment.

“It’s not easy to win the Derby but we have won it,” Sheikh Mohammed said immediately afterwards. “I was jumping up and down in the final furlong. Horses are in my blood. I love them.”

Since so many around the horse world make a living from that love then this was a reassuring success. There has never been any sign of a decline in investment from Dubai over the years but this was a victory to bolster any hint of flagging enthusiasm.

Saeed Bin Suroor won the Derby with Lammtarra so it was a huge moment for the Sheikh’s other main trainer, Englishman, Charlie Appleby.

The significance wasn’t lost on Buick either. The jockey who had twice before finished runner up in the race said: “This is huge, it’s massive. He stayed the trip, he travelled beautifully. The Guineas didn’t happen for him but he’s a very good horse and the team believed in him. Since I wanted to be a jockey this was the day I was dreaming of.”

Co. Kerry born jockey Oisin Murphy briefly looked like upsetting the Dubai party when ranging up on the outside on board Roaring Lion. His run petered out however.

“It was a massive run. The race went to plan. He just doesn’t stay a mile and a half on that ground. But he behaved very well and is a very exciting horse going forward,” Murphy said.

Also happy with Masar’s victory were bookmakers who reported they were saved a payout running into millions on Saxon Warrior.

The odds on favourite raced on the inside from his No. 1 draw and was alongside Masar until early in the straight. Moore’s efforts to secure a run once around Tattenham Corner appeared to be foiled three times, the last by Roaring Lion who hemmed Saxon Warrior in as he launched his own run.

“Failed to pick up,” was Moore’s comment afterwards. “I just don’t think he fired. These races are always tight. The winner got first run and I followed him through so I can’t have too many excuses.”

O’Brien added: “Everything out there today at Epsom might just have been new to them and it would have been a big shock to him coming to this track, but I don’t know.

“I’ve seen it happen to horses where they leave a run here behind them very quick.

“When Ryan dropped down him, he just kept on going without really showing a turn of foot.

“It was a whole new experience with him and I suppose he found everything a bit different. He is a baby horse and it is only his fifth run - we’ll look forward to the next time.

“Saxon Warrior might have just got in awe of everything, but I wouldn’t take anything away from the winner - he just didn’t fire. His next run might tell us a lot.”

The 239th Derby was ultimately about Masar and Godolphin however. The winner is now a 6-1 shot for the King George with some firms and 10-1 for the Arc. Probably no price can be put though on what this Epsom success means to his owner.

1 Ronan O’Gara: Ireland need to be braver than usual ‘in a shoot-out for gold’
2 Jackie Tyrrell: We’ve got the championship back. But where’s the physicality?
3 America at Large: Golfers guilty of legitimising Trump’s toxic regime
4 Ireland can treat fans to some tricks on Halloween night in Paris
5 Jones says Barbarians fiasco made rugby a ‘laughing stock’
Real news has value SUBSCRIBE

Jones says Barbarians fiasco made rugby a ‘laughing stock’ 07:29
Arsenal put three past Dundalk in comfortable win; O’Gara expecting shootout in Paris 07:12
Ireland can treat fans to some tricks on Halloween night in Paris 07:54
Louth starting afresh 10 years on from Leinster heartbreak 07:31
Jackie Tyrrell: We’ve got the championship back. But where’s the physicality? 06:00
Here is your handy guide to sport on television this week