Rostropovich attempts to give O’Brien a first French Derby success 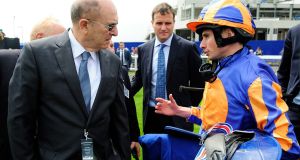 Ryan Moore: will be on board Rostropovich in Sunday’s Prix Du Jockey Club at Chantilly. Photo: PA Wire

A low draw could be a complicating factor for Saxon Warrior in Saturday’s Epsom Derby but it looks a major plus for Rostropovich’s chance of giving Aidan O’Brien a first Prix Du Jockey Club at Chantilly on Sunday.

The Irishman saddles four of the 17 runners for the €1.5 million French Derby and it is the Dee Stakes winner Rostropovich who looks the clear Ballydoyle No. 1. A high draw can famously be a negative in the ten-and-a-half furlong event and fate has looked to favour Rostropovich who will break from stall three under Ryan Moore.

His stable companion, Kenya, the mount of Padraig Beggy, is next to him in two while the home favourite, the French Guineas winner, Olmedo, is in stall one on the rail. O’Brien’s other runners Hunting Horn and Flag Of Honour are in 14 and 12 respectively.

It is 20 years since O’Brien’s French Derby contender, Saratoga Springs, finished fourth in France’s premier classic. The closest he has ever got was with Highland Reel who was runner up in 2015. Moore however was successful in the 2014 Jockey Club aboard The Grey Gatsby.

The only previous Irish-trained winners of the French Derby came back to back with Assert in 1982 and Caerleon in 1983. Sunday’s race is off at 3.15 Irish-time.

Veteran jockey Gerald Mosse brings a French flavour to Saturday’s Navan card where he comes for one ride on the Adrian Keatley trained London Icon.

Not beaten far behind Imaging in the Tetrarch Stakes – and only a length behind the subsequent Irish Guineas hero Romanised – London Icon returns to a mile for a conditions event and is set to run on decent ground conditions for the first time in his career.

Declan McDonogh misses out on Hazapour in the Derby but can strike at Navan on the Gordon Elliott trained Suitor.