Rostropovich second favourite to give O’Brien a French Derby ‘first’ 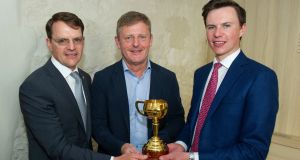 The Dee Stakes winner is a 9-2 second favourite in some betting lists for the €1.5 million Prix Du Jockey Club after 21 names were left in France’s premier classic on Tuesday.

O’Brien is the sole Irish trainer represented with five entries although it is Rostropovich who appears to be Ballydoyle’s No. 1 hope.

Unlike Saturday’s Epsom Derby, in which O’Brien is pursuing a record-equalling seventh success, the Chantilly highlight has remained elusive to the Irishman despite two decades of trying.

His first runner, Saratoga Springs, finish fourth in 1998 and the nearest he has got to victory in numerous attempts since has been Highland Reel’s runner-up placing behind New Bay in 2015. Westphalia was third to Le Havre in 2009.

The Jockey Club has always played second-fiddle to Epsom in O’Brien’s Derby priorities. But with a dozen wins in the Irish Derby factored in, the French version is starting to look an even more notable omission for racing’s most successful figure.

Two winners of the Prix Du Jockey Club have emerged from Ballydoyle in the past however.

David O’Brien saddled the first foreign winner of the race with Assert in 1982. He was trained at a section of stable block in Ballydoyle now used for two year olds. A year later Vincent O’Brien sent Caerleon to win at Chantilly under Pat Eddery.

That was when the French Derby was still run at a mile and a half. In 2005 it was reduced to ten and a half furlongs and the nearest to Irish success since was Dermot Weld’s Famous Name just failing to Vision D’Etat from an unfavourable high draw.

The draw is always an uncertain element to Derby calculations but O’Brien’s principal Jockey Club opposition again looks like coming from one of France’s top trainers Jean Claude Rouget.

He has won the race three times in all including the last two years with Alamanzor and Brametot. Rought this time relies on Olmedo, winner of the French 2,000 Guineas earlier this month, and installed a 7-2 favourite by Paddy Power.

The Jockey Club and the Prix Diane, the French Oaks run later in June, remain the only major European classics O’Brien has yet to win.

In contrast his Epsom record is unparalleled and Saxon Warrior maintains his odds-on status for Saturday’s Derby where he is likely to be joined by stable companions Delano Roosevelt, The Pentagon and Kew Gardens.

O’Brien has also won Friday’s Oaks on half a dozen occasions already while he holds a record eight wins in the Coronation Cup on the same day. In 2012 the Irishman pulled off Epsom’s Group One hat-trick courtesy of Was, St Nicholas Abbey and Camelot.

The red-hot Coronation Cup favourite Cracksman looks the biggest threat to O’Brien pulling off a similar feat later this week and his jockey Frankie Dettori will also hope to upset Ballydoyle’s Derby plans on board Dermot Weld’s Hazapour.

The Italian travelled to the Curragh on Tuesday morning to ride the Derrinstown winner in a piece of work.

“I didn’t come to press any buttons. I just came to have a feel of the horse and get to know his character. He was a very willing partner and won his Trial very well,” Dettori reported. “He’s going to give a good account of himself.”

Saxon Warrior holds a 2-0 advantage over Roaring Lion in their career clashes to date having beaten him in the Guineas and last year’s Racing Post Trophy. However Killarney-born rider Oisín Murphy hopes the Qatar Racing-owned colt can get revenge where it counts most.

“If ever there was a race to do it in this would be the race. Certainly on form Saxon Warrior looks the horse to beat,” said the 22-year-old Kerryman. “His [Roaring Lion] run in the Dante was very impressive. He is very well balanced and I think he should go round Epsom no problem.”

Wednesday’s domestic action is at Gowran where Mazzuri can reap the benefit of a very promising debut at Cork earlier this month.

Willie McCreery’s filly came within a short head of Dynabee on that occasion where she showed how quick ground conditions won’t be a problem to her.

Elysian Plains could be the main threat and in the following race that one’s stable companion Espere can successfully build on her own Killarney debut win in a conditions event.

1 Tour de France: Every yellow jersey winner must feel guilty by some association
2 Clifford brothers to the fore as East Kerry retain title
3 Matt Williams: The sky is not falling in on Irish rugby - but Ireland do need a new plan
4 FAI exposure finally delivers a champagne moment for Ruth Fahy
5 Kevin Babington: Learning to live again after life changed forever on Long Island
Real news has value SUBSCRIBE