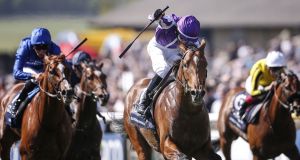 Aidan O’Brien is odds-on to win a record-equalling seventh Investec Derby on Saturday and history beckons too for the Irish trainer’s No. 1 hope, Saxon Warrior.

A month after winning the 2,000 Guineas, Saxon Warrior could take the next step towards becoming racing’s first Triple Crown hero since Nijinsky when the gates open on Epsom’s ‘Blue Riband’ at 4.30.

Less than three minutes will establish if Triple Crown dreams can continue to September’s St Leger; they could also confirm O’Brien’s opinion of this horse being “very different”.

The significance of that opinion was illustrated yet again on Friday when the champion trainer saddled a seventh Oaks winner with Forever Together ridden by O’Brien’s 19-year-old son, Donnacha.

For Saxon Warrior to live up to such billing he will have to overcome an unfavourable draw in stall one of the 12 runners as well as Derby ground conditions a lot softer than normal.

There’s also some notably talented opposition that include four other O’Brien runners and Dermot Weld’s Hazapour who will be ridden for the first time by Frankie Dettori.

However even the mercurial Italian jockey can’t budge Saxon Warrior from being the focal point around which so much of this 239th Derby revolves.

From a Triple Crown perspective it originally looked like the most difficult leg for a horse whose sire won at two miles would be the Guineas mile at Newmarket. Ultimately Saxon Warrior won with such authority the query now is if he is too speedy to stay Epsom’s famously testing mile and a half.

“In the Guineas he travelled like a miler and quickened like a miler,” O’Brien has pointed out. “However we have always thought he was going to be a middle distance horse.”

Horses capable of carrying Guineas speed over the longer trip are rare and include greats of the game such as Nijinsky and Sea The Stars. Whether Saxon Warrior can ultimately earn comparison with such legendary names won’t be decided on Saturday.

But Triple Crown speculation before even the second leg is run indicates the excitement surrounding O’Brien’s suspicion that in this Japanese-bred colt he may be dealing with something exceptional.

The context of such suspicion is the most statistically successful career racing has ever seen. It sees O’Brien on the verge of emulating the record set by Fred Darling, John Porter and Robert Robson through three centuries of Derby history.

But for this Derby it’s significant that on the run-in to the race two of O’Brien’s greatest rivals, Dermot Weld and John Gosden, have both judged Saxon Warrior to potentially be an outstanding Classic colt.

As it should, the Derby will decide if they’re right.