Saxon Warrior and Masar set for another duel in Irish Derby 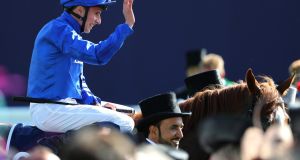 Masar may have upset the odds at Epsom on Saturday but bookmakers reckon Saxon Warrior will get revenge in the Dubai Duty Free Irish Derby at the end of the month.

Despite finishing only fourth to Godolphin’s ‘Blue Riband’ hero at the weekend, Saxon Warrior has been put in an early odds-on favourite for the Curragh’s €1.5 million highlight.

Aidan O’Brien had already nominated the Irish Derby as a possible option for Saxon Warrior to redeem his reputation and a mouth-watering Coolmore v Godolphin head-to-head looks on the cards after Masar’s trainer Charlie Appleby indicated on Sunday the Curragh is on his agenda too.

“Myself and Sheikh Mohammed watched the replays together last night and I think we’re both on the same page.

“We’ll see how he comes out of the race but he stayed the mile and a half well and I think the Irish Derby is the obvious place to go. We have no reason to come back in trip at the moment,” Appleby said.

Both he and O’Brien were out of luck in Sunday’s French Derby at Chantilly which went to the 4-1 second favourite Study Of Man.

The Pascal Bary-trained colt beat the 33-1 runner up Patascoy with Louis D’Or at 66-1 completing an all-French finish. It was a sixth Prix Du Jockey Club success for Bary.

Hunting Horn did best of O’Brien’s four runners in sixth while Godolphin’s Key Victory was eighth, a place in front of Ballydoyle’s No. 1 contender Rostropovich.

Like Saxon Warrior, Study Of Man is a son of the Japanese star Deep Impact and could try to succeed where his sire failed in the Arc this October.

“After he won the Prix Greffulhe it was either come here or go to Epsom and we decided to stay at this distance for the moment,” said a spokesman for Study Of Man’s owners. “We’ll regroup and see whether he could be a horse for the Arc.”

However it is the Irish Derby that’s shaping up into a more immediate championship clash between racing’s two superpower operations.

The Epsom runner-up, Dee Ex Bee, was also nominated as a likely Irish Derby runner by trainer Mark Johnston after completing a perfect Epsom 1-2 for Sheikh Mohammed on Saturday.

Dee Ex Bee races in the colours of his son, Sheikh Hamdan, but it was the sight of Masar carrying the Godolphin royal blue to their first Derby victory which inevitably was the focus of most attention.

Almost quarter of a century after the Sheikh’s cherished Godolphin project first struck on the European classic scene, and having had to play second-fiddle to their great rivals at Coolmore for so long, it was Masar who delivered the most coveted race of all.

“It was a fantastic result and as many people have said already it’s great for racing,” Appleby said. “Coolmore and Ballydoyle are doing what they’re doing and fair play to them. They’re very sporting people and congratulated us too.”

The Curragh will be very much home advantage for Ballydoyle though as O’Brien chases a 13th success in Ireland’s premier classic.

Godolphin’s first classic star Balanchine famously won the Irish Derby in 1994 but Godolphin’s only other success in the race came with Jack Hobbs three years ago.

Ladbrokes have installed Saxon Warrior a 4-5 favourite – the same odds he failed to land at Epsom – for the Curragh with Masar at 7-4.

The Bank Holiday weekend programme was curtailed on Sunday when Kilbeggan had to cancel their card due to a burst water main just over three hours before the scheduled first race. The Co Westmeath track was left without water when a pipe burst in the village of Dysart almost ten kilometres away.

Monday sees a National Hunt card in Listowel and flat action at Gowran where another son of Deep Impact, Conclusion, can bounce back from his saddle slipping during the Gallinule Stakes over a week ago. Newcomer Spiorad carries the presidential colours in the same maiden race.