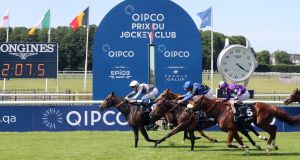 Pascal Bary’s colt was among the leading contenders following an impressive display in the Prix Greffulhe at Saint-Cloud last month and was always travelling strongly in midfield.

He began to reel in the leaders early in the home straight under Stephane Pasquier and battled his way to the lead inside the final furlong.

Several horses attempted to peg him back as the post loomed, but Study Of Man, a son of Deep Impact, clung on for victory.

Key Victory came up short in his bid to provide trainer Charlie Appleby, jockey William Buick and Sheikh Mohammed’s Godolphin operation with a second Derby success in the space of 24 hours following Masar’s triumph at Epsom on Saturday.

Aidan O’Brien saddled a quartet of runners in Flag Of Honour, Hunting Horn, Kenya and Rostropovich, but all finished unplaced.

Meanwhile Sunday’s meeting at Kilbeggan has been cancelled due to a burst water main.

The Westmeath venue was left without a water supply due to the issue in Dysart, leaving the course management with no option but to call off the jumps fixture.

A statement from the track’s managing director Paddy Duncan said: “It is with deep regret that I announce that Kilbeggan races have been called off today due to a burst water main which has left the racecourse with no water.

“My sincere apologies for any inconvenience caused.”

The card will now be staged on Tuesday evening, with original declarations to stand.