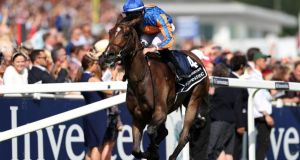 Forever Together shed her maiden tag with a stunning victory in the Investec Oaks at Epsom.

Trained by Aidan O’Brien and ridden by his son, Donnacha, Forever Together was a 7-1 chance having failed to win any of her three previous starts, most recently chasing home stablemate Magic Wand in the Cheshire Oaks.

O’Brien fielded five of the nine runners in all and it was Bye Bye Baby who cut out the early running.

She began to falter early in the home straight and was swiftly passed by Forever Together and the 5-2 favourite Wild Illusion.

However, it was soon clear Forever Together had far more to give and she came home four and a half lengths clear of the market leader.

Donnacha O’Brien — who won the 2000 Guineas for his father aboard Saxon Warrior - told ITV Racing: “She was very impressive. I got a beautiful trip through, I followed Ryan (Moore, on Magic Wand) and he gave me a bit of company until I got to the rail.

“She’s very genuine and galloped right out to the line, she’s a proper staying filly.”

He added: “I should have been closer at Chester, we just ran into a bit of trouble. About a week ago I thought she had a right good chance and then the rain came so I was a bit worried, but she’s handled it really well.

“To be honest, I didn’t expect her to do it. I had the perfect position the whole way. It all went perfect.

“When you’re riding one of his (his father’s) you have a chance, he’s an absolutely genius. He can do things with horses I don’t understand, he brings out massive improvement and I don’t know how he does it.”

Aidan O’Brien said: “It’s incredible, I’m so delighted for everyone, so thankful to Michael (Tabor), John (Magnier) and Derrick (Smith), it’s brilliant for everyone.

“She caught the eye at Chester, she’s a staying filly and got the trip very well.

“We’re all so happy and grateful.”

Earlier Cracksman was made to pull out all the stops to claim a narrow victory in the Investec Coronation Cup.

John Gosden’s colt was the highest-rated horse in Europe last season following a scintillating display in the Champion Stakes at Ascot.

And having appeared better than ever when making a successful reappearance in the Prix Ganay last month, the son of Frankel was a prohibitively-priced 2-7 favourite to claim a third Group One success — but odds-on backers were made to sweat.

Frankie Dettori cut a concerned figure in the saddle from an early stage of the mile-and-a-half contest and drew his whip with over two furlongs still to run, as 33-1 outsider Salouen threatened to cause a major shock.

However, to his credit Cracksman did respond to Dettori’s urgings, clawing back the deficit and getting up in the dying strides to score by a head.

Dettori said: “Cracksman was a bit sleepy today, but he does not enjoy galloping downhill and when I wanted to close the gap, I couldn’t. He felt lethargic, like he did in the Derby last year.

“Silvestre (de Sousa, on Salouen) got five lengths on me and, God, he made it hard work for me, but once we flattened out, the turbo kicked in. Then he started to motor and I thought I might still run out of time, but we got there.

“I didn’t want to win like that, but, a bit like Man United, we find a way to win, and we did.

“You did not see the best of Cracksman today. He was never happy on the track - he is so big -and we know he is a better horse than he showed today. His class pulled him through because any other horse would have downed tools and finished second.

“It was a massive effort to make that ground up. The damage was down round Tattenham Corner because I couldn’t really lay up.

“It wasn’t a Champion Stakes or a Great Voltigeur performance, but it’s three times we’ve taken him here and he’s run a very similar race each time — lethargic, not responsive round Tattenham Corner and in the straight. It was only in the last 100 yards that he made the two lengths up.

“I am happy that I’ve won, but I wanted to show the world a good display. Now that we’ve got this one out of the way, I think a track where he meets the ground is more for him, like Ascot in the Champion Stakes.

“We got this job done, but by the skin of my teeth.”

Gosden said: “Frankie was very clear he doesn’t really handle the track, he got in a muddle coming down the hill and wasn’t really travelling at any stage.

“He doesn’t like racing down a hill, he found it awkward, and it wasn’t until he went uphill that he was happy and he accelerated.

“He wasn’t comfortable at any stage, until the last 50 yards.”

Cracksman was eased to 2-1 from 4-5 by Betfair for the Prince of Wales’s Stakes at Royal Ascot, a race that is set to be the target.

Gosden went on: “It’s hard to pick up on this ground when you give one that much of a lead and, as Frankie says, he’s not in love with the track and he was better where he met the (rising) ground.

“It wasn’t ideal, but he showed his class to get there in the end — it was an awful lot of ground to make up.

“Epsom is probably not Cracksman’s favourite track, but he showed a lot of courage and the jockey didn’t panic, which was good. Full marks to both jockeys.

Owner Anthony Oppenheimer said: “It was quite a surprise. The other horse kept going and that was as close as I like it!

“Cracksman is fantastic. He is so well-bred and a bit similar to Golden Horn (Oppenheimer’s Derby winner in 2015) in many ways. He loves racing, but we know he doesn’t like Epsom.

“This is the last time we will be running him on a severe downhill.”

Sylvester Kirk, the trainer of Salouen, said: “It was lovely to see the horse do what we thought he was capable of. He jumped out in front and made nearly every yard, but was just beaten by a really good horse.

“I’m delighted and disappointed, I would have settled for that beforehand, but watching that I’m disappointed, as I thought he was home and hosed.

“I thought a furlong out he was the winner.”

1 Tour de France: Every yellow jersey winner must feel guilty by some association
2 Kevin Babington: Learning to live again after life changed forever on Long Island
3 Bielsa delighted with improved defence as Leeds move for Cantwell
4 Sam Bennett: ‘A green jersey in the Tour de France is such a highlight of my career’
5 Juan Imhoff and Racing 92 leave it late to end Saracens’ reign
Real news has value SUBSCRIBE