Hopes grow for protocol which permits comprehensive testing of thoroughbreds 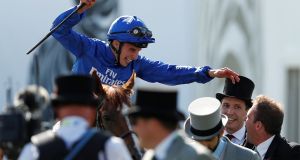 Hopes appear to be growing that an anti-doping protocol which permits comprehensive testing and traceability of thoroughbreds in Ireland could shortly be agreed.

An Anti-Doping Taskforce, which includes representatives of all sectors of racing and breeding, issued a report at the start of 2016, with one of its main recommendations being the implementation of a protocol to allow racing’s regulatory authority carry out testing on premises not licensed by it.

Unlike racing stables, stud farms are not licensed by the Irish Horseracing Regulatory Board (IHRB) – formerly the Turf Club – so its personnel are not authorised to enter them. Only Department of Agriculture officials are allowed access.

Lengthy negotiations involving the Irish Thoroughbred Breeders Association, sales companies and other groups over the past couple of years failed to find agreement over the thorny issue of jurisdiction.

In an attempt to break the impasse the taskforce was reconvened last November under a new chairman Colm Gaynor, a former chief veterinary officer at the Department of Agriculture.

It now seems agreement on the sensitive matter of jurisdiction could be about to be reached through a legislative process involving a Service Level Agreement (SLA) which allows IHRB personnel similar entry powers to Department of Agriculture officials.

A SLA is defined by government as a contract between a service provider and a customer, and they are used extensively by government, for instance in transferring statutory responsibility for water services to Irish Water and providing for local authorities to act as agents for Irish Water.

Horse Racing Ireland’s (HRI) chief executive Brian Kavanagh declined to go into specific detail on the matter on Monday, but did say he was optimistic about a new system being in place in time to cover the 2019 foal crop.

The 16-member taskforce, which includes representatives from HRI, the IHRB, trainers, sales companies, owners and breeders, is set to meet again before any potential agreement is finalised. However, Kavanagh acknowledged that negotiations were “progressing in a positive direction.”

He said: “All parties are working towards a solution. It goes beyond the whole question of drug testing and into the whole issue of the whole life traceability of horses which brings other issues into it. But nothing’s insurmountable.”

Kavanagh said a SLA was “one of the options” being examined by the taskforce, and added he was hopeful a protocol could be finalised sooner rather than later.

“I’m keen to wrap it up reasonably quickly. The logical thing to do would be to have any new measures in place for the foal crop of 2019.

The taskforce was originally set up after a series of steroids controversies, including when the prominent trainer Philip Fenton was “warned off” for three years in 2014. Its members include trainer John Oxx and Michael Halford, as well as the breeders’ representative John O’Connor and Eimear Mulhern from Goffs.

In other news there will be fingers kept crossed at the Curragh that Godolphin sticks to its initial impulse after Masar’s Epsom triumph on Saturday and the colt heads next to the Dubai Duty Free Irish Derby at the end of the month.

Trainer Charlie Appleby appeared to backtrack a little on the €1.5 million classic on Monday, and indicated Masar could run instead in Sandown’s Eclipse a week later.

“He’s not in the Eclipse, but we could supplement him as we did with Hawkbill a couple of years ago, or there is the Irish Derby to think about. We’ll see how he is in the next week or so before we make a decision,” Appleby said.

Dermot Weld has ruled out the Irish Derby for his Epsom fifth Hazapour, but he recently added Bandua to the classic, and that unbeaten colt holds an entry in this Thursday evening’s King George V Cup at Leopardstown.

The American-bred colt has won his two starts to date at Cork on very soft ground, but conditions are set to be very different at Leopardstown where the going is currently good to firm.

Bandua also holds entries in the King Edward VII Stakes and the Queen’s Vase later this month, and the Royal Ascot extravaganza is a definite target for Saturday’s easy Navan winner London Icon.

“He mightn’t have beaten a lot of good horses but there was confidence behind a couple of them and he couldn’t have done it any easier,” reported London Icon’s trainer Adrian Keatley.

“He’s in the St James’s Palace and we’ll also look at the Jersey. I’ll have a chat with Gerald and the owner in the next few days and make a decision on which way we’ll go.”

Fingers will also be crossed at Kilbeggan that there is no repeat of the water supply problems that forced Sunday’s card to be rescheduled to Tuesday.

It could be a good move for Noel Meade, who sends Kagney for the Beginners Chase over the course and distance he ran with such promise on last month.

Off for almost a year and a half, it was little surprise Kagney faltered in the closing stages after being up there throughout when Camlann came through to win. The seven-year-old can see off Hardback this time.