Fifty winners for the season a major milestone for Blackmore 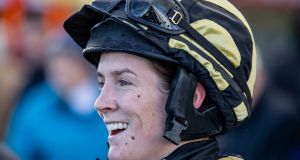 Rachael Blackmore: “I’m absolutely delighted with the way it’s gone. I never thought I’d get to 50 winners in a season.” Photograph: Morgan Treacy/Inpho

Jockey Rachael Blackmore has reached another landmark by riding 50 winners during the current jumps campaign although she is playing down her chances of landing a historic riders’ title this season.

The pioneering jockey reached the half-century at Down Royal on Friday when guiding Bedrock to a shock defeat of Samcro.

Only Paul Townend (53 winners) is ahead of Blackmore at the top of the table and she is rated at just 7-1 by one firm to become the first woman ever to be crowned champion jockey in Ireland.

However Blackmore insists neither the championship, or the opportunity to reach a century of winners, are targets she is setting for herself.

“That’s not in my thinking at all. I haven’t even thought of it. To me, it’s November. I won’t be thinking those thoughts just yet,” she said on Monday.

“I’m absolutely delighted with the way it’s gone. I never thought I’d get to 50 winners in a season, that’s for sure. I’ve been lucky enough to get fantastic support. You have to get on the right horses.

“But I don’t look too far ahead. A lot of jockeys are like that. So much can change in such a short space of time. You’re taking every race meeting as it comes, every race as it comes,” Blackmore added.

She continues her pursuit of winners at Fairyhouse on Tuesday with half a dozen rides including the maiden hurdle candidate Denwork who carries the colours of Michael O’Leary’s Gigginstown Stud.

Gigginstown’s  decision to use the Co Tipperary rider more this season – in particular on horses trained by Henry De Bromhead – has helped propel Blackmore past her previous best tally of 34 winners last season.

During the 2016-17 campaign, which saw her become the first woman ever to land the conditional jockeys’ title, she rode 32 winners.

In comparison the former champion amateur Nina Carberry enjoyed her best ever season in Ireland in 2009-10 with 39 victories.

It continues the remarkable transformation in fortunes of the 29 year old former amateur who drew a blank for the season just five years ago and only turned professional in 2015.

Now the former graduate in equine science from Limerick University is 11 winners ahead of the reigning champion jockey Davy Russell in the jockeys’ table. Other star names such as Barry Geraghty (19 winners) and Ruby Walsh (16) are also trailing her.

Blackmore’s popularity with owners and trainers generally has seen her notch up 317 rides this season, a tally only bettered by her colleague Andrew Lynch with 339.

Her hopes of a first Grade One in the following day’s JNwine Champion Chase were dashed however when the De Bromhead-trained Balko Des Flos could manage only fourth in a performance she described as “disappointing.”

Blackmore’s best opportunity on Tuesday could come in the ladies handicap chase where she teams up with her old ally ‘Shark’ Hanlon for Redwood Boy.

The nine year old carries a first time visor and could figure prominently if repeating a decent performance at Sligo in September.

The impact of up to 15mms of rain forecast rain before racing begins may prove significant to ground conditions.

The four-time flat winner Dawn Hoofer wouldn’t like the going to get too soft for the opening three year old hurdle. But on decent ground she can show the benefit of her jumping debut at Punchestown last month where running a little too free when third to Smiling Eliza.

Gordon Elliott runs two in Dawn Hoofer’s race including Gigginstown’s Flat To The Max who lost his rider at the very first obstacle on his jumping debut at Ballinrobe in September.

With ground conditions slowly starting to turn softer, Elliott’s huge string is starting to hit top gear and Monbeg Worldwide could be the one to deny Blackmore on Denwork.

The diminutive Vinabell won over the course and distance of the handicap hurdle last month and with that experience under belt can defy an 8lb penalty.