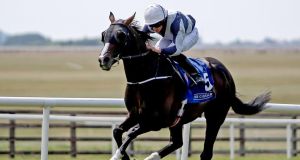 Ryan Moore on Yucatan. The colt has been the ante-post Melbourne Cup favourite since a spectacular Australian debut in a Caulfield Grade Two last month. Photograph: Laszlo Geczo/Inpho

Aidan O’Brien drew a Breeders Cup blank in Kentucky, but switches his international focus to Australia in the early hours of Tuesday morning and a potential first Melbourne Cup success.

A quarter of a century after Dermot Weld’s Vintage Crop transformed the race that famously stops a nation, O’Brien is set to be triple-handed in an attempt to saddle what would be a fourth Irish-trained Melbourne Cup winner.

Weld added to his cup haul with Media Puzzle in 2002 and O’Brien’s son Joseph saddled Rekindling to a famous Irish 1-2-3 a year ago.

It was O’Brien Snr who had to settle for the runner up spot in 2017, through Johannes Vermeer, and in 2007 was third with Mahler.

Star Ballydoyle names such as Yeats tried and failed in the interim, and O’Brien’s varied Melbourne experience with nine runners to date also included a high-profile disagreement over riding tactics with the Flemington’s stewards in 2008.

However, there are plenty experts both in Australia and closer to home who reckon Yucatan is the Irishman’s best chance to date. The regally bred colt has been ante-post cup favourite since a spectacular Australian debut in a Caulfield Grade Two last month.

He is joined among the 24 runners by his stable companions Rostropovich and last year’s Derby runner-up Cliff Of Moher. He has had a “The’”attached to his name to distinguish him from an Australian horse of the same name.

Ryan Moore and Wayne Lordan go to Melbourne from Churchill Downs where Magical’s second to Enable in the $4 million Turf was the most notable performance from O’Brien’s 14 Breeders Cup  runners.

On the run-up to the big race there has been plenty of attention paid to what have been described as lightening quick ground conditions at Flemington, which could be music to O’Brien’s ears.

“He [Yucatan] loves fast ground,” the Irishman told Australian media over the weekend. “The better the ground, the better his chance.”

The negative element to Yucatan’s profile appears to be a wide drawn in stall 23 of the 24 runners. It is 42 years since a horse drawn in 23 has managed to win the cup. The same 23 draw might have cost Tony Martin’s Heartbreak City victory in 2016.

However Lloyd Williams’s son Nick has dismissed the importance of the draw.

He described Yucatan as a “Melbourne Cup winner in waiting” after the horse’s Caulfield success, and told local media in Melbourne: “I think barriers [stalls] are overrated. It doesn’t worry me at all. There’s a 100-metre run to the first turn to work it out.

“In a perfect world you would draw five to 10 but I don’t think it matters. He’s flying. I can’t think of a time when we have taken a horse in better condition to the races.”

The Williams colours will also be carried by The Cliffsofmoher who had two Caulfield starts last month. They both looked promising for a colt who has ultimately proved disappointing since his 2017 Derby effort. Only Godolphin’s Best Solution is ahead of him in the weights, but on fast ground over two miles his class could make him a player, although the finish might test his resolution.

Chestnut Coast will try to become a second Japanese winner of the race, but the bulk of the international challenge is made up by the seven British contenders.

No British-trained horse has managed to win the Melbourne Cup, but in a field apparently dominated by international contenders some layers are going only evens about that statistic changing when the gates open at 4am on Tuesday morning Irish time.

Best of the British hopes could be another of Godolphin’s hopes, Cross Counter, who looks progressive and has reportedly thrived in the Australian spring sunshine.

His trainer Charlie Appleby maintained his superb Breeders Cup record on Friday night through Line Of Duty’s Juvenile Turf success, and can boast a big-race Australian CV that shows he knows what is required to win down under.

The Melbourne Cup will be live on the At The Races channel.