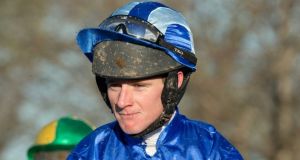 Jockey Chris Timmons has received a four-year ban for a positive cocaine test at Ballinrobe in May. Photograph: Morgan Treacy/Inpho

Jockey Chris Timmons has been given a four-year ban for a positive cocaine test but could be allowed return to race-riding as soon as next June .

Timmons, from Dunboyne in Co Meath, tested positive for cocaine at a meeting in Ballinrobe in May. He hasn’t ridden since the following month and at a recent Referrals Committee hearing chaired by Justice Tony Hunt pleaded guilty to taking the banned substance.

It is the latest positive test for cocaine by a jockey in Ireland. Last November three riders, including the Irish Grand National winner, Ger Fox, were given suspensions after testing positive for the drug at a meeting in Galway a month before.

The Referrals Committee that handed down those suspensions said the deterrent effect of the penalties that had been imposed for cocaine use up to then were not enough. It advised the Irish Horseracing Regulatory Board that the starting point for penalties from now on would be four years.

Timmons has been given a four-year suspension of his licence backdated to start on June 14th, the day after his last ride.

However, the Referrals panel agreed they would consider an application from him for his licence to be reinstated after he has served a period of 12 months suspension, provided he co-operates fully with any requests made by the Senior IHRB Medical Officer and engages positively with a recommended programme.

On Monday the IHRB confirmed Timmons’s ban 11 days after the jockey appeared before the Referrals Committee panel at the Croke Park Hotel in Dublin.

The panel considered a report from a lab in Barcelona that urine samples taken from Timmons at Ballinrobe contained Benzoylecgonine which is a metabolite of cocaine.

The jockey asked for the B sample to be analysed and the A sample findings were confirmed on July 19th.

At the hearing, evidence and submissions were heard from the senior Turf Club medical officer, Dr Adrian McGoldrick, and from Timmons.

The jockey said he regretted his actions, advised of steps he had taken to address certain issues, and said he wished to return to race riding in future.

In other news, top jockey Jack Kennedy has lodged an appeal against a 10- day ban imposed for his use of the whip at Down Royal on Friday. Kennedy was penalised after his ride on Sir Ector in a handicap hurdle.