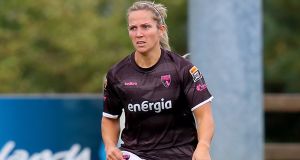 Katrina Parrock: “To get to play in another great stadium will be a real thrill. I can’t wait to get out there.” Photograph: Oisin Keniry/Inpho

It was three years ago this month that Katrina Parrock was sitting in front of her television watching Wexford Youths at the Aviva Stadium winning the FAI Cup for the first time.

“I remember thinking, ‘God, I wouldn’t mind being there one day’,” she says. It seemed unlikely, though, her code was camogie, one in which she excelled too, winning four senior All-Ireland titles with Wexford and three All Star awards.

Fast forward to October 2018. Six minutes to go in the FAI Cup semi-final between Wexford Youths and UCD Waves, the game scoreless. Aisling Frawley breaks down the right wing, cuts the ball back from the byline and it’s swept home first time in to the bottom left corner – by Katrina Parrock.

“I was driving by the Aviva the other day and I just looked at it and thought, ‘my God, I’m actually going to be playing there on Sunday”.

It’s been a long and winding road. Parrock played a bit of everything as a young girl – camogie, soccer, Gaelic football, hockey – before reaching that point where she had to focus on one.

She’d won an Ireland U-19 cap so the future looked bright on the soccer front, but by 16 she had become part of a brilliant Wexford camogie team that would go on to win four All-Irelands in six years.

“I knew I couldn’t keep the two of them up and at that time, even though I loved soccer, I was probably more mad about the camogie. My mother [Liz] and brother introduced me to GAA at a young age, with Our Lady’s Island GAA Club, and my granddad [Jack Cullen] was a very good hurler, he played for Wexford.

“Then on the other side my father [Brian] who was born in England played for Man City Boys, so I suppose the two sporting backgrounds came together to influence me.”

Just a week after she turned 17 she burst on to the Croke Park pitch as a second -half substitute in the 2007 All-Ireland camogie final, her coolly-slotted point helping Wexford see off Cork to win their first senior title in 32 years.

Cork came back to win the next two All-Irelands before Wexford embarked on a three-in-a-row. by then Parrock, a corner forward, was rated as one of the finest players in the country.

“I’m not sure there’ll ever be a bunch of players like it again, they were brilliant,” she says. “All the memories I have, I’ll never forget them. Although I don’t have the medals to go with them…….”.

“They were thrown out.”

“We were renovating the sitting room about two years ago and I had them in a drawer. We put them in to black bags because we were painting everything, and then we were going to sort them out after. But Dad said, ‘that’s rubbish’, and off they went, never to be seen again. So all I have are the memories. My Mam was asking ‘Katrina, where did you put those medals?’.

“I said, ‘ah, they’re in the cupboard in the bedroom’, even though I knew they weren’t there. I knew she’d kill me. They’re well crushed at this stage.”

Medal-less too since 2012 has been Wexford camogie, Cork and Kilkenny back ruling the roost, and come 2017, after 11 years on the senior panel, Parrock decided to walk away.

“I don’t really know the exact reason, to be honest, all I knew was that I just didn’t enjoy it any more. When I was going out on the field I was thinking, ‘what am I doing here?’ I lost the love for it.

“My Mum had got sick, she had breast cancer, so going through something like that makes you assess your own life. And camogie takes over your life, like any sport does when you’re achieving great things, so it kind of put things in perspective for me. I just needed to take a bit of me time, time with my family, appreciate what was around me, maybe that’s the reason why? I don’t 100 per cent know, really, but I think that contributed to it.”

“And people are always asking me if I miss the camogie, but unfortunately no, I’m not. It’s kind of scary to say but it wouldn’t even interest me picking up a hurl and a ball now.

“It’s amazing how something can be such a huge part of your life and all of a sudden you have no interest in it. I had a set of goals when I was younger: to play for Wexford, to play in Croke Park, to win All-Irelands, to win All Stars, and I suppose that’s what I did, I ticked the boxes, and maybe that’s one of the reasons I lost my appetite for camogie.

“ It should never be an effort, it should only be about enjoyment. And camogie had become an effort. You have to enjoy what you do, life is too short unfortunately. But Mum is doing really well, she’s very strong, I don’t know how she’s got through it all, but she’s on the right side of it now.”

As soon as the news of her giving up camogie appeared in the local paper, Parrock received two offers to switch codes. She turned down the chance to join the Wexford Gaelic football panel, instead taking up then Wexford Youths manager Laura Heffernan’s invitation to sign up for the club in June of last year.

“I’d carried on playing soccer with Kilmore United through the winters, once the camogie was over, and loved it. Youths were such a successful team I decided I’d love the challenge of reaching that level.”

It was a successful season for the club, regaining the league title from Shelbourne, but it took Parrock time to bed in.

“It was very hard at the start, the girls were so many streets ahead of me and I knew I had a lot of work to do. I had to bring my skill level up a good bit to try and compete for a place on the team and I did a lot of gym work to get myself fitter and stronger.

I’ve worked hard this year and I think it’s paid off. I’ve got 11 goals this season, which I’m thrilled with, and I just feel like I’ve contributed more. I’m loving it.”

And come, Sunday Wexford, managed this season by Tom Elmes, will attempt to complete a treble (having already retained their league title and won the Shield) when they take on league runners-up Peamount United in the FAI Cup final at the Aviva Stadium.

“It’ll just be an honour to play there,” says the 28-year-old. “I was lucky enough to have played in Croke Park a number of times, and always on the winning side, so to get to play in another great stadium will be a real thrill. I can’t wait to get out there.”

Longer term, Parrock, who studied Recreation and Sport Management at Waterford Institute of Technology but is hoping to join the Gardaí during their next recruitment drive, hasn’t ruled out another switch in codes.

“I’ll definitely try rugby before I finish my sporting career,” she says.

“The Irish team is amazing in what they’ve achieved, you look at them coming off the field and they’re black and blue and you’re like, ‘Jesus, the effort they put in’.

“I’ve played sport all my life, there’ll come a time when I’ll have to say I can’t play any more, and it’s then you’d regret the years you could have carried on or tried new challenges. So I wouldn’t rule anything out.”

For now, though, all thoughts are on Sunday and adding another medal to, well, the somewhat shrunken collection.

Will you look after this one?