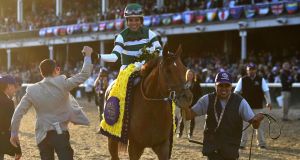 Aidan O’Brien’s ambition to win the Breeders’ Cup Classic will have to wait for at least another year after Mendelssohn could eventually finish only fifth behind the US champion Accelerate on Saturday night.

Unlike his Kentucky Derby disaster in May, when finishing last after a slow start, Mendelssohn broke superbly in the $6 million highlight and was hard driven by Ryan Moore to take the lead with over a circuit of the Churchill Downs track to go.

As the Irish star led down the back straight he briefly promised to deliver a famous success and a third European triumph on the Breeders’ Cup Saturday card.

Frankie Dettori had earlier masterminded a double for Prince Khalid Abdullah with Enable becoming the first Arc winner to win at the Breeders Cup in its 35-year history and Expert Eye landing the Turf Mile.

However, the toll taken by the effort to get the lead started to tell on Mendelssohn early in the stretch as Accelerate and Godolphin’s Thunder Snow launched challenges. The Irish star faded from the places in the closing stages as Accelerate gave jockey Joel Rosario a third success of this Breeders’ Cup.

In contrast it was a first ever Breeders’ Cup success for Accelerate’s trainer John Sadler on what was his 45th starter. Gunnevera stayed on for second while Thunder Snow ran an honourable third.

It’s 24 years since Frankie Dettori won his first ever Breeders’ Cup race and the 47-year-old Italian once again proved the European stalwart at US racing’s showpiece event.

Expert Eye came wide, fast and late to land the Mile for Michael Stoute. But it was Enable’s Turf victory that brought Dettori’s career haul to 14 when making history after eight previous Arc winners had failed at US racing’s showpiece event.

Enable got the better of a prolonged stretch duel with O’Brien’s Magical and afterwards Dettori exclaimed: “She’s conquered America! She’s the first one to do it. Amazing, I’ve no words to say how brilliant she is.

“We had two inches of rain this last 48 hours and her wheels were spinning round the bend, so I took her on a wide trip to get her on fresh ground and then she was comfortable.

“I went for the better ground and she found another gear. She’s very special.”

“I was yelling for Frankie, it was just a fantastic race. So much has gone into the whole year and it became an emotional roller-coaster ride for Prince Khalid.

“He will take his time before deciding on her future, but whatever decision he makes will be the right one,” he said.

O’Brien was magnanimous in defeat.

“Everything went perfectly to plan, and she’s been beaten by a great filly, with a great trainer and owner.

“I don’t know whether she will carry on next year, we will talk about it.”