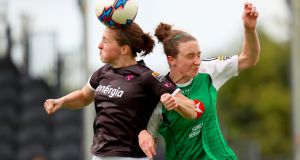 Peamount United got the better of Wexford Youths when the sides met in the League Cup final in September. Photograph: Oisin Keniry/Inpho

Wexford Youths are without Ireland international Rianna Jarrett for the women’s FAI Cup final on Sunday when a win would give Tom Elmes’ side their second double in four seasons.

Having wrapped up the league title with a game to spare, Elmes was able to rest a number of players and give others games time in last week’s 1-1 draw at UCD Waves but the side that starts on Sunday is likely to have a familiar look about it for the final outing of the season despite Jarrett missing out after having broken a bone in her foot while on international duty last month.

Peamount United finished a slightly distant third in the league but having beaten Wexford in the League Cup final back in September, then second placed Shelbourne in the semi-finals of this competition, manager James O’Callaghan, who has a full squad to choose from, says his players are “buzzing,” as they prepare for their first trip to the Aviva in eight years.

Elmes claims that the Dubliners are favourites on the basis that they scored 22 goals in their last three league games but when this is put to his opposite number, O’Callaghan suggested that the Wexford boss is “having a laugh”.

“They have won four league titles in five seasons and this would be a second cup in four years, so I don’t think they get the credit they deserve, but they seem pretty good at shaking the favourites tag.

“Beating them in the League Cup final was a real turning point for us, although we are still looking for revenge because they beat us in the league the following week, and since the semi-final the whole squad has been buzzing. They’ve all lifted their game looking to make sure they are involved on Sunday.”

Three of the four meetings between the teams this season ended 2-1 with Peamount winning just that League Cup game in Wexford while the first encounter of the season was a 2-2 draw. Wexford’s experience and game management has, O’Callaghan suggests, been a factor in them edging things between the two sides although he is hopeful that a team that combines established names like Karen Duggan and Aine O’Gorman with rising stars like Niamh Farrelly and Amber Barrett might just be “peaking at a nice time”.

Wexford will not be underestimating the challenge, insists Elmes. “They are a really good side with some senior internationals and some really good young players but we know what to expect,” he says. “We need to be at our best on Sunday but if we are then we would be hopeful that we can come out on top.”

Both clubs are, meanwhile, well represented in the Continental Tyres sponsored end of year awards with five between them in the shortlist of six for Player of the Year while Barrett has already guaranteed herself the Golden Boot.