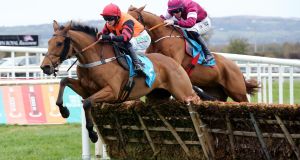 Rachael Blackmore on Bedrock jumps the last to beat Jack Kennedy on board Samcro in the WKD Hurdle at Down Royal. Photograph: Kelvin Boyes/Presseye/Inpho

Having engineered the downfall of Samcro the day before at Down Royal, on Saturday Rachael Blackmore has a first ever Grade One success in her sights on board Balko De Flos.

The 29-year-old is currently fighting it out with Paul Townend at the top of the jockeys’ table and Bedrock’s shock defeat of the 4-9 favourite Samcro took her to 50 winners for the season.

It was a first Grade Two victory for Blackmore and a landmark Grade One in the first top-flight prize of the season could quickly follow.

It certainly adds an intriguing element to a JNwine Champion Chase that otherwise looks overwhelmingly dominated by Michael O’Leary.

The Ryanair boss’s Gigginstown team is seeking a sixth win in a row in the €140,000 feature and have five of the seven runners, including Blackmore’s mount, Balko Des Flos.

It’s a race that can be portrayed as Gigginstown v Jessica Harrington, although the latter’s two runners, Woodland Opera and Sandymount Duke, are officially rated lower than all of O’Leary’s quintet.

Balko Des Flos is top-rated but has yet to win over three miles. Like last year’s runner up, Road To Respect, he is making his first start of the season.

The value of race-fitness was illustrated by Bedrock’s victory and that could prove crucial to Outlander’s chances of winning the race back to back. Forecast overnight rain could also help last year’s winner.

Outlander won in 2017 off a much less satisfactory seasonal reappearance than he put in at Punchestown behind another of his rivals, Sub Lieutenant, last month. He might be able to give Jack Kennedy a pick-up after Samcro’s eclipse.

Champion jumps trainer Willie Mullins has just two runners at Down Royal. But on Sunday he has half of the 20 runners in the €100,000 November Handicap on the final day of the 2018 turf flat season at Naas.

Aidan O’Brien and his son, Donnacha, will be crowned champion trainer and jockey respectively but Mullins can dominate the concluding day.

Riven Light’s 112 rating makes a convincing case despite stamina doubts in the Listed Finale Stakes. Exchange Rate was badly hampered in last month’s Cesarewitch at Navan and could be best of Mullins’s ten in the big handicap.