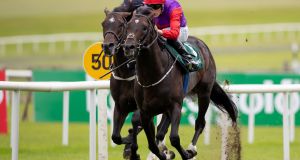 Romanised will take his chance on Sunday in the Prix Du Moulin in Paris. Photograph: Inpho

The Curragh’s chief executive has pledged that racing’s controversial new flagship facility will bring its A Game to the upcoming Irish Champions Weekend.

Next Sunday’s leg of the €4.6 million showpiece event is the second major test of the hard-pressed Curragh which opened the doors on its €81 million revamp in May.

Since then it has been beset with problems, most notably at June’s Irish Derby which drew criticism on how a new amenity designed to cater for up to 30,000 people failed to cope with a crowd of less than 12,000.

Shortly afterwards the track’s former chief executive Derek McGrath was replaced by Leopardstown boss Pat Keogh who next weekend will oversee both programmes in what will be the sixth edition of Irish flat racing’s shop-window event.

Keogh is reluctant to predict what the crowd size will be for the Curragh’s next big examination although he doesn’t expect it to be as big as Derby day.

There was a restricted attendance for Champions Weekend during construction work at HQ in 2017 and last year. In 2016 an official crowd of 9,255 was reported by the Curragh.

“There were well documented issues on Derby day. I hope we’ve learned from that and we won’t have a repetition of those. We’re set up to send a lot of happy customers home on Sunday night.

“We’ve tweaked quite a number of things so this is a very important day for us. I do know that those who come will have a much better experience. We’ll bring our A Game next Sunday,” Keogh said on Friday.

Next Saturday’s Leopardstown programme has had to be rejigged to avoid the Qipco Irish Champion Stakes clashing with the All-Ireland football final replay. The big race will now be run at 4.15pm with the last race run at 6pm.

Last year’s official attendance at Leopardstown was 14,226 but the GAA match could have an impact this time.

With Aidan O’Brien expressing doubt about Japan lining up for the €1.25 million highlight, it is his older filly Magical who is a 5-2 favourite in most antepost lists.

The shape of the Champion Stakes will become more clear after Tuesday’s forfeit stage although two current entries, Romanised and Circus Maximus, will line up before that in this Sunday’s Prix Du Moulin in Paris.

Ken Condon’s Romanised is a general favourite for the €450,000 Group One - due off at 2.50pm Irish time after his resounding victory in the Prix Jacques Le Marois at Deauville last month. He is joined once again by his pacemaker Success Days.

O’Brien landed the Moulin with Rock Of Gibraltar in 2002 and drops Circus Maximus back to a mile after the St James’s Palace winner apparently failed to stay in the Juddmonte International at York.

Before that O’Brien won’t run Ten Sovereigns in Saturday’s Betfair Sprint Cup at Haydock due to soft ground conditions. But he still has two chances to win an 11th Group One of 2019.

So Perfect and Fairyland are set to take their chance in a contest made even more wide open by Advertise also missing out due to a poor scope.

Both Ballydoyle fillies ran in York’s Nunthorpe last month where So Perfect outran her 25-1 odds in third behind Battaash.

O’Brien is chasing John Gosden by almost £300,000 in the British trainers’ championship.

The Irish man is a 7-4 shot to eventually overhaul his rival – who isn’t represented in Haydock’s big race – and secure a seventh cross-channel title.

The champion National Hunt trainer saddled 10 winners at Galway during the summer and his 2016 Irish Leger hero, Wicklow Brave, leads a team of half a dozen Day One runners.

Wicklow Brave is two from two over fences and can maintain his 100 per cent record in a novice chase.

Stratum is another short-price proposition while Mullins runs two in the featured €40,000 Kerry Group Handicap Chase.

Cabaret Queen is a new recruit out of Dan Skelton’s yard although Ask Susan could finally secure the decent pot she’s been threatening to.