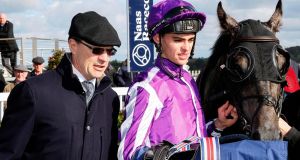 Donnacha O’Brien will be on duty for father Aidan at Newcastle on Friday. Photograph: Peter Mooney/Inpho

The task of securing a record-equalling tenth Veterm Futurity got harder for Aidan O’Brien after new threats were added to the reopened race on Monday.

A total of 17 entries are now in Britain’s final Group One of 2019 which was switched to Newcastle’s all-weather circuit on Friday after Doncaster at the weekend was rained off.

They include Godolphin’s Yarmouth winner Verboten and the Ralph Beckett trained Kinross who won his maiden by eight lengths at Newmarket earlier this month.

O’Brien had five of the six declarations on Saturday, including Mogul and the Beresford winner Innisfree. The Irishman had 11 of the 12 acceptors at the five-day stage.

The only non-Ballydoyle hope then was Andrew Balding’s Kameko who remains in the race which will be the first Group One race run on an all-weather surface.

O’Brien now has nine of the 17, with the handful of original declarations among them, while the reopened contest has also attracted Jim Bolger’s Geometrical and Emmet Mullins’s supplemented maiden, King Of The Throne.

Another Ballydoyle possibility is Wichita who got taken out of Sunday’s Criterium International at Longchamp because of the testing ground conditions.

O’Brien has confirmed his son Donnacha will be on duty at Newcastle and is likely to team up with the likely favourite Mogul in the Futurity.

Later on Friday night Ballydoyle will be heavily represented on Day One of the Breeders Cup in Santa Anita but O’Brien Jnr will be at both Newcastle and the final day of the Irish flat season at Naas on Sunday.

“Donnacha cannot do the weights on any of them in the USA so he will stay here,” O’Brien said on Monday.

“Obviously the turf is what we would have preferred but that’s just not the way it is. Newcastle, I think, is a very good all-weather track,” O’Brien also reported.

Paddy Power rate O’Brien at evens to saddle two or more winners over the two days of the Breeders Cup.

Kameko remains one of the main threats to Ballydoyle’s hopes of a first top-flight win of 2019 for its strong team of two year old colts.

“The horse did a sensational piece of work last week and Andrew was bursting to run him, understandably, because he hasn’t had a horse like this for a while,” reported David Redvers, racing manager to Kameko’s owner, Qatar Racing.

“We’ve got to go (to Newcastle) and now I hope conditions might suit us a little better. At the end of the day if Newcastle is seen to be that fair and sound a surface that John Gosden is going to start off fillies like Enable there then why shouldn’t we have a Group One on that surface.

“Either you just consign all-weather racing to being the cheap winter fodder we’re not interested in or you actually accept there are times when it’s the perfect place to run this sort of race,” he added.

In National Hunt news the start of Down Royal’s ‘November Festival’ could see the return to action of the champion bumper star Envoi Allen on Friday.

Gordon Elliott has entered the Cheltenham Bumper hero for the two and three quarter mile maiden hurdle that opens two days of quality action in the north, culminating in Saturday’s €150,000 Ladbrokes Champion Chase.

If Cheveley Park’s five-year-old is Elliott’s new great white hope then the former occupant of that role, Samcro, could try to start redeeming his tarnished reputation over fences on Friday.

The hugely touted chestnut arrived at last year’s Down Royal fixture with huge expectations only to be beaten for the first time in the Grade Two WKD Hurdle.

mas, after which he was found to have been suffering from a lung infection.

The former point to point winner had a wind operation in the interim and has been entered for a Beginners Chase on Friday.

“He has always looked like a chaser and all is good with him,” Elliott has reported.

This Friday’s renewal of the WKD Hurdle has attracted nine entries including the Grade One winning mare Honeysuckle.

Unbeaten in four starts, including the Irish Stallion Farms Novice Hurdle at Fairyhouse over Easter, Henry De Bromhead’s star is a general 7-1 third favourite for the OLBG Mares Hurdle at Cheltenham.