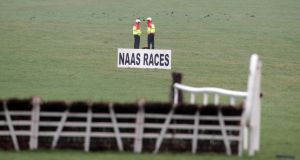 Television coverage of Irish racing has been criticised as second class by the chairman of Naas racecourse who urged the sport’s administration to adopt a more proactive approach.

Dermot Cantillon condemned the lack of on-course coverage by Racing TV at Sunday’s fixture in Naas which included two Listed races as well as the €120,000 Foran Auction Race Final.

Cantillon, a former Horse Racing Ireland board member and an ex-chairman of the Tote, elaborated further on Monday.

“I’m very disappointed as a chairman of a racecourse that’s making a huge effort, putting all the money we make back into Irish racing, and having an exceptional card yesterday, and seeing we’re being treated as a second class citizen. It’s just not good enough,” he said.

Cantillon said he only found out there were no Racing TV presenters on track was when trying to organise an interview with the visiting English trainer Clive Cox.

“That meeting deserved to have on-course coverage and what I would ask is if there was the equivalent meeting in England, with two Listed races and another race with that amount of money, would there be someone on course? Of course there would, so what does that suggest,” he added.

Racing TV, the subscription channel formerly known as Racing UK, took over coverage of Irish racing at the start of this year following a controversial media rights deal that extends to the end of 2023.

It is owned by Racecourse Media Group which comprises the majority of racecourses in Britain.

Fears were expressed after the deal was revealed that coverage of racing at Ireland’s 26 racecourses might be diluted in comparison to when pictures were broadcast on the old Attheraces channel, now Sky Sports Racing.

On Monday, Cantillon, who is married to the former Irish Horseracing Regulatory Board senior steward, and current vice-chairperson of HRI, Meta Osborne, suggested consideration should be given to an Irish racing channel similar to the RMG model.

“But my main point I’m making is we should get a fair crack of the whip (on Racing TV) and we’re not getting that,” he said.

“I think AIR (Association of Irish Racecourses) and HRI should be more proactive and more reactive with Racing TV. I think that’s how we’ll get more of a platform for Irish racing. We seem to be accepting of what they want to do rather than dictating what we want to do,” Cantillon added.

“The facts don’t support that. There’s a higher number of on-course presentations on our racing channel this year than there was last year,” he said.

“I think Racing TV have been very responsive to queries we’ve raised with them and this idea of second class citizenship is not one I agree with. But I’m happy to sit down with Dermot and go through any ideas he has on that issue,” Kavanagh added.

An RMG spokesman said Racing TV had presented from Naas 10 times in 2019, part of 175 days of Irish racing that featured on-track presenters.

He added: “RMG has been delighted to support the team at Naas this year, with race sponsorships, social media support, a Club Day for members, and by facilitating coverage from Naas on ITV in February.

“We look forward to continuing to work together on these and other elements in the future.

“For those who prefer uninterrupted coverage from one fixture, then Racing TV Extra provides dedicated feeds from every race meeting. We’ll of course take Dermot’s feedback on board and hopefully we can increase those presentation sites in the future.”