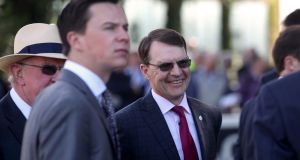 Aidan O’Brien’s pursuit of a first Group One for his team of two-year-old colts continues to Friday. Photograph: Bryan Keane/Inpho

Aidan O’Brien’s pursuit of a first Group One for his team of two-year-old colts continues to Friday.

O’Brien came off worst in a ‘match’ race against Frankie Dettori for Sunday’s Criterium International at Longchamp with Armory proving no match for the impressive winner Alson.

The $250,000 contest was reduced to just two runners after Armory’s stable companion Wichita got taken out due to the testing ground, and then Joseph O’Brien’s supplementary entry Lady Penelope was withdrawn after getting upset in the stalls.

Apprentice jockey Shane Crosse had a lucky escape but both he and the filly looked to emerge without serious injury.

It left the German colt Alson to record an easy win over Armory, who looked to flounder in the conditions, and provide Dettori with a 19th Group One of the year.

On Saturday the Ballydoyle pair Arthurs Kingdom and Mythical filled the minor placings in the Criterium De Saint Cloud behind local winner Mkfancy.

It means the filly Love is still O’Brien’s only top-flight juvenile winner of 2019, a notable statistic in relation to Coolmore Stud’s commercial stallion-making requirements.

Instead it is their arch-competitors Godolphin who have dominated the vital top two-year-old races this season, particularly with both Pinatubo and Earthlight.

It is a dozen years since O’Brien didn’t secure a Group One with a colt and he was long odds-on to dismiss such an unwelcome prospect with five of the six runners in Saturday’s scheduled Vertem Futurity.

Heavy rain ultimately cancelled Doncaster but Britain’s final Group One of the year has been rescheduled for Newcastle on Friday, although whether it will represent a tougher challenge for O’Brien’s team will become more clear on Monday.

Andrew Balding’s Kameko was the only non-Ballydoyle entry for the Futurity at last week’s five-day stage.

There was widespread criticism of other British trainers for not taking up the challenge and the fact the race will now be the first Group One run on an all-weather surface could make for a new complexion to the contest.

Mogul however looks set to still lead O’Brien’s hopes with all five original declarations likely to line up despite the surface change.

“That’s what we’re thinking at the moment,” he said on Sunday. “I think it’ll be fine. Obviously Newcastle is a very good track and if the horses are well we’ll look forward to running them there.”

Newcastle staged the Futurity on turf 30 years ago when it had to be switched from Doncaster but it is now a Tapeta track. The Arena Racing company owns Doncaster and Newcastle.

Later on Friday night O’Brien’s Breeders Cup challenge will begin in Santa Anita including the Dewhurst runner up Arizona who is a general 5-2 favourite for the Juvenile Turf.

The Irishman has won the race four times before, the last of which was Mendelssohn in 2017.

Another Irish favourite on Friday night is Jessica Harrington’s Albigna, heroine of the Prix Marcel Boussac on Arc day, who is a 4-1 favourite for the Juvenile Fillies on turf.

O’Brien however is the mainstay of the Irish challenge and will also have the chance to add to a dozen previous Breeders Cup victories through his star filly Magical in the Filly & Mare and Derby winner Anthony Van Dyck in the Turf.

His international focus will then switch to Australia the following Tuesday and a possible first Melbourne Cup success.

Hunting Horn earned a likely slot alongside Il Paradiso in the ‘Race that stops a Nation’ with a Group Two win at Moonee Valley on Saturday. Later on the card Magic Wand finished fourth to the Japanese winner Lys Gracieux in the Cox Plate.

The step up in trip will also be unknown territory for Hunting Horn but Comerford told local media: “A mile and a quarter is probably his ideal trip. At the same time you don’t know until you step them up how their stamina kicks in. Aidan is quietly confident there’s another good day in him.”

Conditions will be testing at both Bank Holiday Monday fixtures which makes Dermot Weld’s decision to run Mazara in the opening fillies maiden look significant.

It was very different ground on her Naas debut last month where a lot went wrong for Mazara but she still ran on notably well to be third to Fancy Blue.

Wexford’s jumps fixture includes an intriguing four-runner Listed Chase where the former Grade One hurdler Champagne Classic has the advantage of a win under his belt already this season.

The mare Kupatana, formerly trained by both Nicky Henderson and Paul Nicholls, has a first start for Henry De Bromhead but may not be as at home on the ground.