Kameko is only competition to Ballydoyle team in Doncaster Futurity 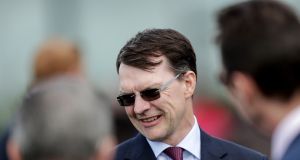 Aidan O’Brien: he saddles half of the four runners in the Group One Criterium International at Longchamp. Photograph: Laszlo Geczo/Inpho

The Andrew Balding-trained Kameko isn’t the best horse in action this weekend but might just be the most important.

Only his presence prevents Doncaster’s Vertem Futurity from the absurd scenario of a major Group One prize being competed for by a handful of runners from the same yard and ownership.

Fate might yet intervene given Doncaster has to pass a 7.30am inspection due to forecast rain. But if it goes ahead Kameko’s presence is vital in competition terms.

It’s hardly the fault of Coolmore or Aidan O’Brien who is long odds-on for a record-equalling 10th victory in Britain’s final Group One of 2019. The Irish team is simply placing their huge reservoir of juvenile talent to best effect.

That is also reflected in Longchamp a day later where O’Brien saddles half of the four runners (Armory and Wichita) in the Group One Criterium International. His son Joseph is responsible for the supplemented Lady Penelope, a shot at top-flight glory for apprentice Shane Crosse.

Such initiative seemed beyond others among flat racing’s elite operations in relation to the Futurity, for which Japan’s 3.4 million guineas brother Mogul looks like starting an overwhelming favourite.

He is backed up by the Beresford winner Innisfree and three others from Ballydoyle, although for the sake of competitiveness every official finger is likely to be tightly crossed that Kameko makes it to the start-line unscathed come 3.25pm.

“Obviously the ground is a concern. They are going to get an awful lot of rain. Having said that, there are suggestions in his pedigree that he could handle it. I think it’s more than likely he’ll run,” Balding has reassured of Qatar Racing’s colt.

O’Brien’s strength in depth will have been illustrated again 35 minutes prior to the Doncaster highlight when a trio of Ballydoyle juveniles line up for the Criterium De Saint-Cloud.

The services of Oliver Peslier (Arthurs Kingdom) and Mickael Barzalona (Mythical) have been called on as the range of O’Brien’s Saturday ambition also stretches to Melbourne via Newbury and back to domestic action at Leopardstown.

Ryan Moore has remained in Australia after Ten Sovereigns’ Everest flop last week to ride Magic Wand in the $5 million Cox Plate due off at 6.55am Irish time.

Moore and O’Brien teamed up to win Australia’s premier weight for age race with Adelaide in 2014, and Magic Wand has got a beneficial stall three draw around the tight Moonee Valley circuit.

Frankie Dettori’s services have been secured by O’Brien at Newbury where the Italian rides Year Of The Tiger in the Group Three Horris Hill Stakes. Sean Levey is on the other Ballydoyle hope New World Tapestry.

Later Dettori teams up with the wide-margin Thurles winner Peaceful in a later Listed event, but he will be on the opposing side in the following day’s Criterium International when riding the sole non-O’Brien runner in the race.

Leopardstown’s final flat fixture of the year kicks off a busy Bank Holiday weekend programme, which is scheduled to see two meetings over each of the three days.

However, a yellow rainfall warning means the Wexford card scheduled for Sunday will have to pass a 4pm inspection the day before.

If Doncaster gets a green light Donnacha O’Brien’s Futurity ride on Mogul will mean his championship rival Colin Keane gets the Leopardstown programme to himself with half a dozen rides. They include his own chance of a family triumph as Keane partners Laughifuwant for his father Gerry in the Listed Knockaire Stakes.

Very testing conditions could help this confirmed mudlark close the ratings gap to Pincheck on Laughifuwant’s return to seven furlongs.

Keane is on Justifier in the featured Group Three Eyrefield Stakes, the only contender not produced by either Aidan or Joseph O’Brien.

The newcomer Dawn Rising is interesting, although the Navan winner Degraves is a proven soft-ground performer whose experience could be crucial.

With just four more flat fixtures to go, Battleoverdoyen’s chasing debut at Galway on Sunday reflects the changing of the seasons.

The Grade One winner started favourite at the Cheltenham festival but that turned into a flop and he was pulled up. Two and three-quarter mile on very soft ground should not be a problem to the former point-to-point winner.