Magical back to her brilliant best at Ascot

‘She is the ultimate racehorse, that is what she is. She is incredible’ 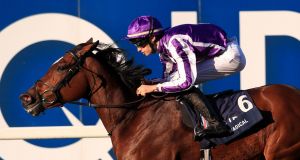 Magical stamped her class on the Qipco Champion Stakes at Ascot. Aidan O’Brien’s ultra-consistent four-year-old won the Fillies And Mares Stakes on the corresponding card 12 months ago, since when she has trebled her Group One tally with victories in the Tattersalls Gold Cup and the Irish Champion Stakes.

During the same period she has finished second to old foe Enable in the Breeders’ Cup Turf, the Coral-Eclipse and the Yorkshire Oaks, as well as filling the runner-up spot behind Crystal Ocean at Royal Ascot and finishing fifth in the Prix de l’Arc de Triomphe.

Turning out less than a fortnight after her latest appearance in Paris, there might have been doubts about whether Magical would be able to produce her brilliant best in the testing conditions, but she got the job done in the hands of Donnacha O’Brien. The even-money favourite travelled powerfully on the heels of the pace-setting Regal Reality for much of the 10-furlong contest before being nudged to the front in the straight.

Confirmed mud-lover Addeybb emerged as the most serious danger, but try as he might, he could never quite get on terms with Magical, who found enough for pressure to emerge victorious by three-quarters of a length. Japanese mare Deirdre ran a fine race to finish third, with the lightly-raced Fox Tal also emerging with credit in fourth.

O’Brien - remarkably winning the race for the first time - said: “She is just incredible, but she is classy as well. A mile and a half probably stretches her, although she has won over that a mile and a quarter is really her. She’s by Galileo which makes her special, they don’t know when to stop. They never hold a grudge and mentally they are unbelievable. She is the most unbelievable mare I’ve seen.

“What can you say about her? She is the ultimate racehorse, that is what she is. She is incredible. It looks like she is still progressing, which is amazing. We would love to keep her in training, but the lads will make a decision. They have to decide whether they want to go to the Breeders’ Cup or not, and that would be the next one if they decide they want to go.

“Found was an unbelievable mare and you can definitely compare them well. If she goes to the Breeders’ Cup, she would go to the Filly & Mare Turf.”

William Haggas, trainer of Addeybb, said: “Hats off to that filly (Magical). She’s better than him. He has run a really good race today. He liked the conditions, it all went perfectly well, just three-quarters of a length not fast enough. I’m very proud of him.

Seiko Hashida Yoshimura, racing manager for Deirdre’s owner, Toji Morita, said: “We might think of Hong Kong, but I’m not sure. We’ll have to see how she is. As we have seen today she is so fresh and so brave. We have enjoyed our visit. All our team love Britain and British racing. It is so special - every race.

“It has been unforgettable - a life-changing experience for everyone in the team. We may extend our journey to next year. Hopefully we can see her here again next year. We never ran against Enable, so we might see her. That would be another dream. Everyone has to be proud of her. It’s amazing. This horse has opened the gate for everyone from Japan.”

Stradivarius had earlier suffered his first defeat in almost two years as O’Brien’s Kew Gardens came on top in a pulsating climax to the Qipco British Champions Long Distance Cup.

The remarkable Stradivarius has completely dominated the staying division over the past couple of seasons – with back-to-back wins in the Yorkshire Cup, Gold Cup, Goodwood Cup and Lonsdale Cup seeing him scoop the Weatherbys Hamilton Stayers’ Million in both 2018 and 2019.

Having added the Doncaster Cup to his glittering CV last month, John Gosden’s popular chestnut was the 8-13 market leader to stretch his unbeaten run to 11 – a streak which goes all the way back to him finishing third behind Order Of St George in this race two years ago.

Everything appeared to be going according to plan for the market leader for much of the two-mile journey, with Frankie Dettori seemingly content to bide his time as Withhold and Kew Gardens’ stablemate Capri forced the pace.

Kew Gardens – winner of the Queen’s Vase at Royal Ascot, the Grand Prix de Paris and the St Leger at Doncaster last season and runner-up spot in the Ormonde Stakes, the Coronation Cup and the Irish Leger so far this term – was the 7-2 second-favourite in the hands of the trainer’s son, Donnacha, and travelled strongly to the lead soon after the turn for home.

Dettori swiftly went in pursuit and Stradivarius looked set to emerge triumphant after ranging alongside and even poking his head in front racing inside the final furlong.

However, Kew Gardens refused to yield and after a thrilling duel, the pair passed the post almost as one before the judged confirmed the Ballydoyle inmate the winner by a nose, giving the successful rider his first career victory on Champions Day.

O’Brien said: “We were training him for the Gold Cup and he got an injury and it all went pear shaped so we’re just so lucky to get him back. He pulled all the muscles in his back just before Ascot.

“He barely made it back for the Irish St Leger and that race just didn’t go right. He’s an incredible horse.

“It’s possible he’ll be around next year. The lads will decide what they want to do. There is a big chance he will be.He’s a very brave horse, so I’m delighted.

“I’d say the Gold Cup next year would definitely be the target if he stayed in training next year. I would imagine that’s it for the season.”

Gosden said: “It was too soft and he was not entirely happy on it. He didn’t really love it through Swinley Bottom. It was very bold and sporting of Mr [Bjorn] Nielsen to run him, but he just found the ground too soft.

“He did well to win it last year as they went no pace. This year he found it too much of a slog in the ground. He has run a wonderful race and has come back in and had a whinny, so he is happy.

“Take nothing away from the winner, we headed him and he’s come back. It’s not his ground, Frankie said he wasn’t very happy through Swinley Bottom.

“We came fairly close [to pulling him out], but it’s Champions Day and we would have let the day down a bit if we didn’t run Stradivarius.

“He has been beaten a nose, so there is no disgrace in that. It is just not his ground. We will be back for the Ascot Gold Cup on good to firm in good shape.”