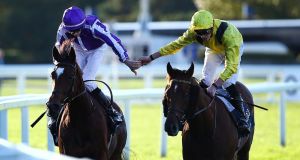 Donnacha O’Brien on Magical is congratulated by second place James Doyle on Addeybb after winning the the Qipco Champion Stakes at Ascot on Saturday. Photograph: Charlie Crowhurst/Getty Images

Magical filled in a rare Group One blank for Aidan O’Brien in Ascot’s Champion Stakes at the weekend but the Irish trainer is likely to pursue a record at Doncaster this Saturday.

The Vertem Futurity is Britain’s final Group One prize of the year and O’Brien has a record-equalling 10th victory in the race in his sights.

That would match the late Henry Cecil’s haul in the mile event which O’Brien first won in 1997 with Saratoga Springs and which he’s landed for the last two years with the subsequent Guineas heroes Saxon Warrior and Magna Grecia.

Other Ballydoyle stars to have landed the Futurity en-route to Classic glory are the Derby winners Camelot (2011) and High Chaparral (2001).

O’Brien again has multiple entries for the race including Mogul, the 3.4 million guineas full brother to Japan, and Innisfree who won the Beresford on his last start.

The complexion of the race will become more clear after Monday’s forfeit stage.

The Ballydoyle team notched a 15th Group One of the year with Magical’s Qipco Champion Stakes victory on Saturday.

It finally filled in perhaps the most notable gap on her trainer’s astonishing CV as the filly held off Addeybb in an exciting finish.

O’Brien described Magical as the ultimate racehorse afterwards and with her old rival Enable finished for the season, an attempt to go one better than last at the Breeders’ Cup in Santa Anita could be on the cards.

Magical pressed Enable all the way to the line in last year’s mile and a half Turf but O’Brien said: “If she goes to the Breeders’ Cup I would imagine she would run in the Fillies & Mares race.”

This time the Ballydoyle team has the Turf race in mind for their Derby winner Anthony Van Dyck, who returned to form with a third to Magical in last month’s Irish Champion Stakes.

Even by the standards of all the champions he’s had through his hands Saturday’s big winner has clearly secured a niche of her own in O’Brien’s affections.

“Magical is an unbelievable mare. From the start of her career every time she races, she turns out.

“Every morning she wakes up with a total clean sheet. She never holds offence to nobody, even if they upset her the day before. She just takes in on the chin and asks ‘what do you want me to do today?’

“The Arc was a strongly run race and she has come out of that and won here. She handles ease in the ground, goes on fast ground, what can you say: she’s the ultimate racehorse, that’s what she is.

“It’s hard to say but it looks like she’s still progressing which is amazing,” he said.

Magic Wand is another stalwart Ballydoyle filly and she could attempt to finally break her Group One duck in Melbourne on Saturday.

Placed half a dozen times at top-flight level Magic Wand is set to line up in Australia’s top all-aged race, the Cox Plate, at the Moonee Valley track.

O’Brien won the race in 2014 with Adelaide before the renowned mare Winx began her unprecedented run of four in a row.

Both Magic Wand’s stable companion Hunting Horn and last year’s Irish Derby winner Latrobe look to be waiting on whether or not they secure a berth in the final line-up.