Ban on Supreme Racing Club has serious implications for Kemboy 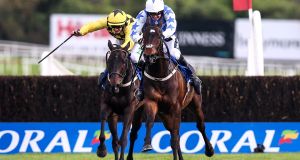 Kemboy with Ruby Walsh on board wins the Coral Punchestown Gold Cup last May at Punchestown. Photograph: Tommy Dickson/Inpho

Horse Racing Ireland’s move to ban the entry or declaration of horses owned by the Supreme Racing Club has been criticised by some ordinary syndicate members.

HRI’s step was in response to allegations of financial misdemeanours involving the club. It is understood those allegations include claims of shares in horses being oversold.

On Thursday HRI confirmed its suspension of Supreme Club horses which means the Cheltenham Gold Cup favourite Kemboy could be forced to miss his intended return to action at Down Royal next week.

The horse that provided Ruby Walsh with a fairytale retirement success at the Punchestown festival had been due to line up in the Ladbrokes Champion Chase at the ‘November Festival’.

Now the horse that was 6-1 favourite for Gold Cup glory at Cheltenham in March could be banned from racing for some time to come.

Kemboy is one of over an estimated 20 horses trained by Willie Mullins for Supreme Racing Club. Mullins was unavailable for comment on Thursday as was the club’s Irish representative, Jim Balfry.

Supreme Racing Club was founded in 2011 by Englishman Steve Massey and reportedly has about 500 members. In recent years it has become a familiar operation on racecourses in Ireland and Britain, enjoying other big race victories with horses such as Aramon, Airlie Beach and Cadmium.

Another of its good horses, the Grade Three winner Listen Dear, was sold at a Goffs UK Sale on Thursday for £38,000.

Documents seen by the Irish Times reveal that HRI first contacted Supreme Racing Club in August requesting details relating to the membership of each individual horse, including contact details and shareholdings. Nothing was received.

Earlier this month HRI informed Supreme that they could no longer make withdrawals from their HRI owner account. They also notified them that their account would be suspended if all information wasn’t provided by October 18th. Once that date passed the account was suspended.

That means no entries or declarations will be accepted for any of the club’s horses while the suspension is in place.

A Galway-based member of the Supreme Racing Club said on Thursday that he has been dismayed by events in the club. However, he is also deeply disappointed by HRI’s response to concerns he and others expressed to them over the management of Supreme.

“We’ve been working for a long time with HRI. The IHRB (Irish Horseracing Regulatory Board) have been copied in and the Department of Agriculture know about it as well. And their only resolution is to suspend the account,” said Martin Murray.

“That is wrong. They don’t have to affect the horses and the individual small owners because we’ve done nothing wrong.

“I’ve a serious issue with HRI because of the way they’ve dealt with this, because I said to them all along we would help but we wouldn’t be buried and they threw us under the bus. I’m not vindictive [but] they haven’t done their statutory obligations.

“Now we’re under the bus and we’re the people that have to go and sort it out even though they’re the horse racing authorities, along with IHRB and the Department of Agriculture.

“This isn’t about me. It’s about the ordinary owner who’s a member of a club or a syndicate. We’re not Rich Riccis. But we’re still entitled to be treated correctly,” Murray added.

Some members of the club have suggested they could take legal action and a HRI document on the matter states: “Suspending Supreme Horse Racing will not resolve many of the issues that have been raised by individual members.

“HRI is not in a position legally or under rules to make judgements on many of the issues brought to our attention by concerned members. This is for individual members to follow up by seeking legal advice, should they so wish.”

A full list of a syndicate’s members, including names, addresses and phone numbers, along with the share breakdown held in each horses, is basic information required to be submitted under the rules of racing and HRI’s directive on owner registration.

That directive was introduced in July and a number of racing clubs are now required to transfer to the syndicate model.

The immediate racing focus, however, is likely to revolve around Kemboy and his participation, or not, in Saturday week’s €150,000 feature in Down Royal.

The seven-year-old star was one of the stories of last season, winning three times at Grade One level. The only blemish on his campaign was when unseating his rider at the very first fence in the Cheltenham Gold Cup won by his stable companion Al Boum Photo.

He redeemed himself subsequently with an impressive victory at Aintree and a landmark success under Walsh at Punchestown.

What is Supreme Racing Club?

Members pay an upfront cost for a share in a horse and pay a monthly fee to cover costs. It is designed on the basis of a maximum 20 owners per syndicate. There are reportedly up to 500 members involved in almost 30 horses at present.

The club’s Irish spokesman Jim Balfry, a former prison officer in Portlaoise jail, explained earlier this year: “It makes racing ownership more accessible for people and that’s what we’re trying to do.”

He added last January: “Apart from myself and Steve, nobody knows when the owners show up on the day whether someone has a 5 per cent share or a 1 per cent share . . . We have the odd knocker but you’ll have that and all I know is we’re inside the tent. We’re in it, going through all the experiences, having some great days and giving people the opportunity to have them at an affordable price too.”