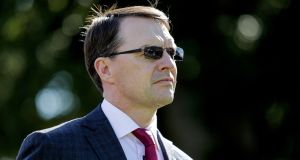 Trained by Yoshito Yahagi, Lys Gracieux was already a dual Group One winner in her home country and she teamed up with Damian Lane in a race that also featured the Aidan O’Brien-trained Magic Wand.

Ryan Moore was positive from the start on Magic Wand as Lane settled towards the rear of the field on the winner, with Danceteria racing just in front of him.

Magic Wand was still at the front turning for home in the 10-furlong feature, but Lys Gracieux made effortless progress down the outside in company with Castelvecchio and pulled a length and half clear at the line. Te Akau Shark was third.

Magic Wand stayed on for fourth while Danceteria was last of the 14 runners.

Lane partnered another Japanese raider — Mer De Glace — to win the Caulfield Cup last week and he was thrilled to add to that success.

“This is unbelievable,” said Lane.

“To grow up as a racing fan watching this race and watching my idols win this race, to join them on the honour roll is such a privilege.

“These Japanese horses are beasts, it’s just great to be associated with them. I’ll be back on Melbourne Cup Day with Mer De Glace, so let’s hope we can do some more damage there.”

Moore was satisfied with the performance of Magic Wand, who was beaten four lengths, adding: “She travelled well in a good position and she kept galloping to the line as best she could. I thought she ran well all things considered.”

After enduring a luckless run on his Australian debut in the Toorak Handicap, Chief Ironside bounced back with a short-head victory and could now go for a bonus in next Saturday’s Cantala Stakes at Flemington, although Menuisier is also looking at the option of the Mackinnon Stakes a week later.

He said: “He was very unlucky at Caulfield and he’s come on since so I was hopeful he’d run well.

“He’s a nice horse and he showed it today.”

O’Brien and Moore also hit the target on the undercard with Hunting Horn winning the McCafe Moonee Valley Cup.

The well-travelled four-year-old triumphed by a length and a quarter over two miles, guaranteeing himself a start in next month’s Melbourn Cup in the process.

Stable representative TJ Comerford said: “Aidan likes the horse, we’ve had him now for a while and he goes everywhere with Magic Wand.

“He’s been breathing down her (Magic Wand) throat but he got a result today, which is great.

“The race suited him because they went steady and he’s been running over a mile-and-a-quarter.”