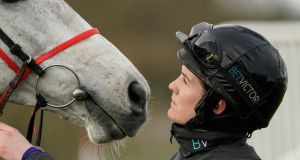 It has been a long few weeks for racing enthusiasts, with the spectre of the coronavirus looming large over the Cheltenham Festival.

More than €4 million has been traded on Betfair’s ‘will racing go ahead’ market over the last few weeks, with fears over the possible cancellation of the Festival becoming increasingly real.

The Cheltenham Festival is the beating heart of national hunt racing - every year revolves around four days in south west England.

So it will be a great relief when the tape is dropped at 1.30pm on Tuesday afternoon, and that familiar, guttural roar rumbles around the Cotswolds.

With large-scale public events coming under serious threat and doubts lingering over most sports it could be a long few months ahead.

We might as well enjoy it while we still can, and what better to take your mind off the impending doom than Cheltenham? Here is everything you need to know ahead of the best week of the year.

The Festival is slightly earlier this year - it starts on Tuesday March 10th and reaches a conclusion on Friday March 13th. Unlucky for some (hopefully the bookies).

The Festival is held in the glorious surroundings of Prestbury Park in Cheltenham, Gloucestershire (UK).

Self-isolation doesn’t sound so bad when you factor in all four days of Cheltenham are being broadcast live on free-to-air television, with Virgin Media One and ITV both showing the first five races each day (1pm-4.30pm). Racing TV show will show the full card on each day.

However if you’re stuck in the office and haven’t called in sick then you can follow every race throughout the Festival via the Irish Times liveblog, which will be up and running from around 12.30pm Tuesday-Friday.

Can I still go?

260,000 people are expected through the gates this week and you can join them - tickets for all four days are still available here.

As of Monday morning the official going was soft on both the old and the new courses - with the cross country track heavy in places. The weather since christmas has been poor but Cheltenham drains well - don’t be surprised if it’s given as good to soft on Tuesday, despite the 5mm of rain expected on Monday afternoon.

A wet start to the week is forecast, with showers on Tuesday morning and throughout the afternoon on Wednesday - it’s set to clear up by Thursday and Friday.

Stacked. Out of the 14 Grade One races Ireland are responsible for eight of the antepost favourites, as well as being loaded in the handicaps. Willie Mullins and Gordon Elliott lead the charge but Henry de Bromhead could be in for a big week with the likes of Honeysuckle, Minella Indo and A Plus Tard in his arsenal. Band Of Outlaws gave Joseph O’Brien his first Cheltenham winner in 2019 and he has an ever-improving string at his disposal. The veteran Supasundae would prove a popular winner for Jessica Harrington while Paul Nolan is bidding for a first Festival winner since 2011.

Last year’s Prestbury Cup was a 14-14 draw, Joseph O’Brien clawing it back for Ireland as Early Doors took the Martin Pipe on Friday afternoon. Ireland are odds-on favourites to win it this year.

In a weighing room without Ruby Walsh the competition for top jocky at the Festival is as wide open as it has been for the best part of two decades. And among the contenders to top the pile this year is Rachael Blackmore, who heads to Cheltenham with an enviable book of rides. Notebook (Arkle), Honeysuckle (Mares’), Minella Indo (RSA) and A Plus Tard (Ryanair) all have solid Grade One credentials, while the she could hoover up a number of rides elsewhere, especially with Jack Kennedy absent through injury. It’s hard to envisage Blackmore not adding to her two Cheltenham successes in 2019.

The 2015 Champion Hurdle winner coming back to win at the Festival five years later as a 12-year-old novice chaser? Unheard of, impossible - until you factor in that the horse in question is Faugheen. After numerous injury problems The Machine has looked reborn over fences, with three victories from three since November. Two of those have come in Grade Ones - including at the Dublin Racing Festival in February - bringing his tally up to 11. He is entered in Thursday morning’s Marsh Novices’ Chase - a victory would bring the house down and surely represent one of Willie Mullins’ finest training performances.

The 2020 renewal of the Champion Hurdle is a far from vintage one, with Nicky Henderson’s classy mare Epatante the current favourite (7-2). Willie Mullins has suplemented Cilaos Emery (7-1) and also has Grade One winner Sharjah (12-1), who is looking to bounce back from a disappointing performance at Leopardstown in February. Jessica Harrington’s veteran Supasundae is a multiple-Grade One winner, will like the ground and could provide each-way value at 12-1.

Elsewhere Mullins has a typically strong hand in the curtain-raising Supreme with Asterion Forlonge (3-1) now favourite ahead of Nicky Henderson’s Shishkin (10-3). Blackmore could land her first winner of the week in the Arkle with Notebook (3-1) while there is a mouth-watering clash to look forward to in the Mares’ Hurdle, with Benie Des Dieux taking on the unbeaten Honeysuckle. This renewal of the Mares’ is arguably a more intriguing race than the Champion Hurdle.

Wednesday’s Champion Chase looked set to be the race of the Festival, with the exciting pretender Chacun Pour Soi (2-1) taking on Defi De Seuil (11-8) and the two-time winner Altior (3-1) - until Nicky Henderson reported his stable star lame on Sunday morning. Altior has been declared for the race, but faces a battle to be fit to defend his crown.

Elsewhere all eyes will be on Envoi Allen (6-5) in the opening Ballymore - last year’s Bumper winner is arguably the best novice hurdler in training - while the mighty Tiger Roll (Evs) is looking for a staggering fifth Festival win as he defends his Cross Country crown.

If Faugheen can land a remarkable victory in the opening Marsh Novices’ Chase then it could be an emotional day, with odds-on favourite Paisley Park (4-6) also set to be a hugely popular winner of the Stayers’ Hurdle should he defend his crown on Thursday.

A Plus Tard (9-4) is the current favourite for the Ryanair but Willie Mullins Min (11-4) could be well placed to land his first Festival win at the fourth time of asking - he finished behind Altior in 2016 and 2018 while Ruby Walsh admitted he got his tactics wrong in last year’s Champion Chase.

This year’s Gold Cup is one of the most wide open for years. The 2019 winner Al Boum Photo (4-1) is favourite again and would become the first horse to retain the race since Best Mate (2002, 2003, 2004). Al Boum Photo has had one solitary run at Tramore this season - preparation which served him well last year - and favouritism is largely due to the face he hasn’t done anthing wrong.

Delta Work (6-1), Kemboy (9-1) and Presenting Percy (11-1)all hold legitimate claims while King George winner Clan Des Obeaux (7-1) and Nicky Henderson’s Santini (4-1) are also firmly in the mix. Lostintranslation (13-2) struggled at Kempton on Stephen’s Day but his performance at Haydock in November was seriously impressive and he could be the one to land for Colin Tizzard.

The opening Triumph Hurdle looks a brilliant race, with Solo (10-3), Goshen (7-2) and Allmankind (4-1) difficult to split at the top of the market. Paul Nolan’s Latest Exhibition (6-1) has strong claims in the Albert Bartlett where Ramses De Teillee (12-1) could relish testing conditions.

NAP of the week

Double of the week