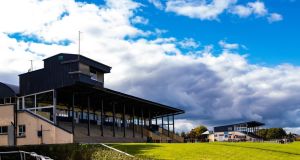 HRI also plans to open a new all-weather track at its own course in Tipperary by 2022. Photograph: @tipperaryraces /Twitter

Horse Racing Ireland has unveiled its ambitious five-year strategic plan for the thoroughbred industry with a key aim being to increase annual government funding to €98 million by 2024.

The state’s contribution to racing in 2020 remains unchanged on last year at just over €67 million.

On Tuesday, Irish racing’s ruling body released extensive targets for the industry over the coming years. They include increasing sustainable employment in the sector to 35,000 - over 6,000 more than at present - and boosting the overall economic contribution of the racing and breeding industries to €2.5 billion.

HRI also plans to open a new all-weather track at its own course in Tipperary by 2022 and wants to have €90 million in prizemoney up for grabs by the end of the new strategic plan.

It is the first such long-term strategy publicly launched by HRI in almost a decade, harking back to pre-economic crash days when government funding could be guaranteed for five years at a time.

Concerns over Brexit have cemented the more recent trend towards racing’s funding, through the Horse & Greyhound Fund, being decided on an annual basis.

Despite that, and current political uncertainty about the formation of any new government, as well as reservations expressed by Sinn Fein over state support for the sector, HRI has set out broad ambitions for the period 2020-2024.

“We have to make the case for racing and I would be confident setting out that to any government of any hue,” HRI’s chief executive Brian Kavanagh said at Tuesday’s launch in the Curragh racecourse.

A central element to the new plan will be equine welfare, identified as a priority after coming into focus both here and in other major racing jurisdictions worldwide in recent years.

The capacity to trace a thoroughbred throughout its life is central to such welfare objectives but progress on such a system has appeared to stall in Ireland.

The new plan proposes whole of life traceability to be developed this year and Kavanagh said targeting having such a system in place by the end of 2021 is realistic.

A new equine and welfare campus at the Irish Equine Centre is anticipated to begin next year and be finished by 2023.

Having already approved Tipperary as the site for a second all-weather track in the country - after Dundalk - HRI now plans to push ahead on the project having had to delay development plans last year.

The new facility is intended to boost the number of fixtures in Ireland to 416 by the end of 2024, an increase of 60 on this year. Kavanagh said that 25 of those extra fixtures are planned to be at the new all-weather track.

HRI chairman Nicky Hartery also set out half a dozen priorities designed to increase the return on government investment and improve the value of racing to the rural economy.

“The most recent analysis shows that for every euro of government support the racing and breeding industry receives, it returns over €30 to the economy, mostly in rural Ireland,” said the businessman.

“Following a series of changes in betting tax arrangements off course betting tax collected by the government amounted to €94 million in 2019.

“This figure comfortably exceeds exchequer funding provided to horse racing and a projected growth in these receipts in the coming years will allow for a progressive increase in funding by 2024, with a reduced cost to the exchequer,” Hartery added.

Other aims outlined were to increase the numbers of horses in training here to over 10,000 with a minimum race value of €12,500.

Attendances are projected to increase by 200,000 to 1.5 million in 2024 while at least €70 million is expected to be put towards a new capital development scheme for racecourses throughout Ireland.