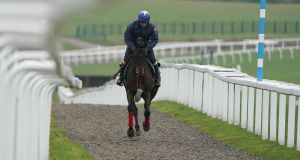 On a windswept gallop in central France, Emmanuel Clayeux is looking a couple of weeks into the future – and also, he hopes, three or four years.

Urgent De Gregaine and Diesel D’Allier, Clayeux’s main contenders for the Cross Country Chase at the Cheltenham Festival, were among the horses exercising here on Tuesday morning, and will be aiming for a repeat of their one-two finish over the unique obstacles in November when they return to Gloucestershire on March 11th. Only time will tell if there were also Festival contenders for 2022 or 2023 working alongside them, but the odds are that there was at least one future star among the couple of dozen horses cantering around his converted cattle farm in Auvergne.

Clayeux describes himself as a trainer, a breeder and a trader, and an astonishing number of top-class chasers and hurdlers have taken their first steps towards Cheltenham on his gallops. He bred Al Boum Photo, last year’s Gold Cup winner and a leading contender for this year’s race. Delta Work, another major player in the Gold Cup betting, also started his career with Clayeux before being sold to Michael O’Leary’s Gigginstown Stud operation.

Chacun Pour Soi and Defi Du Seuil, two of the favourites for the Queen Mother Champion Chase, also passed through his hands as young horses, as did the multiple Grade One-winning hurdler, Apple’s Jade.

These are just a few of the locally bred horses sold to major jumping owners after launching their careers with Clayeux, whose first client from Britain was Martin Pipe, around 20 years ago. He now has around 80 horses, many of which are three- or four-year-olds looking for a buyer, and hopes are high that Urgent De Gregaine and the striking grey Diesel D’Allier will provide another advertisement for his eye for a Festival winner next month.

“This is the best breeding area in France for jumping horses,” Clayeux says. “After the second world war, the mares that had been working the fields were put with thoroughbred stallions and they have got lighter and lighter and faster and faster. They are still AQPS [with non-thoroughbreds in their pedigrees] but they are 99 per cent thoroughbred.

“It is a big business for us now. We need to sell the horses, and if a horse like Al Boum Photo had not been sold, it would have been difficult to win big races with him in France. We have only one big track [at Auteuil in Paris] and if horses are not strong enough to run there [at three and four] we have nowhere else.”

In order to win at Cheltenham next month, Clayeux’s runners will probably need to beat the hugely popular Tiger Roll in his prep race before an attempt to win an unprecedented third consecutive Grand National, while Might Bite, the Gold Cup runner-up in 2018, is another high-class opponent.

Urgent De Gregaine was around 23 lengths behind Gordon Elliott’s chaser in third place in last season’s Cross Country Chase, but Clayeux feels that his 12-year-old is in better form this time around.

“He looks better to me this year than last year and he likes to travel,” the trainer says of a horse whose form at Cheltenham reads 1-2-3-2. “He will probably go back to the Pardubice [in the Czech Republic] in October [after running at Cheltenham] and then he will be retired. Felix [De Giles] will ride him at Cheltenham, and on Diesel D’Allier, I think it will be Charlie Deutsch [who rode him to win there in November].”

Urgent De Gregaine was less than five lengths behind Diesel D’Allier over the cross-country course in November but was giving 22lb to his stable companion. Next month, however, the pair will be running off level weights and Urgent De Gregaine is fancied to reverse the form both by his trainer and the bookmakers, who have priced them up at around 10-1 and 20-1 respectively.

However his own runners fare next month, on past form Clayeux has at least one future Festival winner somewhere in his impressive nursery for jumping stars. Which one? “It is too early to tell,” he says, “and also perhaps a secret”, mindful that picking out one name might shave a percentage off the value off the others. One young horse that has already found a buyer, though, is T’Al Raison, a half-brother to Al Boum Photo, who will be racing in JP McManus’s colours next season.

“JP McManus does not buy many horses that have not raced,” Clayeux says, “but he was sold after I recommended to Charlie Swan that he should come to look at him. When I sat on him as a three-year-old, he felt stronger than Al Boum Photo at the same age.” – Guardian