Decisions on cancellation of meetings will be led by governments, says HRI chief executive 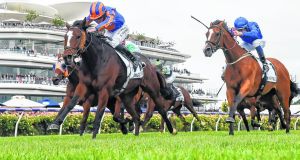 Irish racing’s top official has described as encouraging comments from the country’s chief medical officer about cancellations of mass gatherings not being a significant part of steps to manage the spread of the coronavirus.

Horse Racing Ireland’s chief executive Brian Kavanagh said the sport is continuing on a “business as normal” basis but also stressed that whether that continues or not would ultimately be up to Government authorities.

“With something like this to a large degree it is out of our hands. If a medical officer or the Department of Health say gatherings such as race meetings shouldn’t take place we can’t really second-guess that,” he said on Friday.

Kavanagh was speaking in the wake of the first positive test for coronavirus on the island of Ireland. A woman who flew to Dublin from Italy before travelling to the North is being treated in Belfast.

With next weekend’s scheduled Ireland-Italy Six Nations rugby match already postponed, and other large events being called off in other European countries, concern has been expressed about the upcoming Cheltenham festival coming under threat.

The odds of jump racing’s biggest week of the year being cancelled have been cut to 11-8 by one firm. That is despite Cheltenham officials insisting there is currently no threat to the meeting.

On Friday, a British Horseracing Authority spokesman said speculation about Cheltenham was understandable in the circumstances but could distract from advice on which the population at large is being asked to focus on.

“At present racing continues as usual and the sport remains in agreement that there is no need to develop a policy regarding abandonment of any specific fixtures due to coronavirus at this time.

“We will continue to speak to government and should a situation arise where this is required then the sport has established mechanisms in place for handling such scenarios,” he said.

This weekend sees a reduced fixture schedule in Ireland and Britain due to more traditional reasons after Navan’s programme was called off on Friday due to safety fears over forecast high winds.

However, the spectre of Covid-19 has already been felt in Saudi Arabia ahead of Saturday’s inaugural $20 million Saudi Cup which is the richest horse race in the world.

Aidan O’Brien’s Magic Wand will line up in Riyadh although her jockey Ryan Moore missed out on Friday’s action at the King Abdulaziz track due to travel delays caused by the global outbreak.

Racing authorities in Japan and Hong Kong have measures in place to limit attendances at meetings and closer to home both HRI and the BHA have said there are contingency plans available should cancellations become necessary.

Last year racing ground to a halt for a week after an outbreak of equine flu on the run up to Cheltenham. In 2001, the animal disease foot and mouth meant Cheltenham was cancelled and there was no racing in Ireland for almost two months due to travel restrictions.

Kavanagh emphasised that the current situation is far removed from such cancellations but added that Ireland’s racing authorities were keeping appraised of developments.

“The experience with previous cases such as foot and mouth, and to a lesser extent last year with equine flu, is that closing down is the easy part. It’s a basis for reopening which is the challenge.

“Certainly during foot and mouth the novelty of closing down wore off very quickly and they had to get into contingency measures as to what circumstances they could get back racing again. We will look at those.

“[But] a mass viral outbreak among humans is not something we have done any preparation for or done any major scenario planning for.

“If that happens we’re in much more serious difficulty. If it gets to the stage of closing down race meetings then you’re talking about closing down transport links and travel restrictions.

“So it would be a major issue for society in general, not just racing, and please God it won’t come to that,” he said.

Comments by the Department of Health’s chief medical officer, Tony Holohan, about not anticipating widespread cancellations were welcomed by Kavanagh.

“That’s a positive. In the context of that interview, the interviewer asked about the St Patrick’s Day parade where there are obviously a lot of people coming from a lot of disparate parts.

“From a racing point of view the biggest meetings on the horizon [in Ireland] are probably Fairyhouse and Punchestown which are still over a month away so there’s still time to take stock on that.

“That’s consistent with my view that it’s business as normal. We haven’t pushed any buttons to do anything otherwise. We’ve had nothing formal from the department,” he said.

Magic Wand will be one of seven Irish trained horses taking part on Saturday’s Saudi Cup card which is worth over €29 million in all.

The big race winner will receive a massive $10 million first prize although Magic Wand is among the outsiders in the 14-runner field as it will be her first time racing on dirt.

Not surprisingly the betting is dominated by US horses including last year’s disqualified Kentucky Derby “winner” Maximum Security.

Godolphin will be represented by the top grass performer Benbatl who won on his dirt debut at Meydan earlier this month. He will be ridden by the Killarney-born British champion jockey Oisín Murphy.