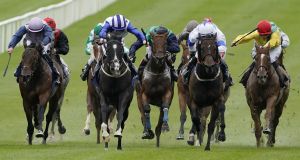 Ger Lyons and Colin Keane are in pursuit of a second major cross-channel handicap prize of the season on Saturday, with Buffer Zone lining up in the William Hill Ayr Gold Cup.

The partnership teamed up to win last month’s Ebor with Mustajeer. Buffer Zone operates at the other end of the distance spectrum, and has been favourite all week for one of the major sprint prizes of the campaign. That is on the strength of his impressive Bold Lad Handicap win at the Curragh’s “champions weekend” programme last Sunday.

Buffer Zone has been raised 8lb by the handicapper for his authoritative success yet carries a 5lb penalty at Ayr.

Lyons has admitted a six -ay turnaround is not ideal, but ground conditions look like being in the Irish raider’s favour, he is clearly in form and he has got a high draw in 21.

It will be Keane’s first time riding at Ayr, and he said: “They tell me a high draw is a good draw, so I hope they’re right. I hope he’s still ahead of the handicap but we’ll find out.”

Son Of Rest’s dead-heat in last year’s race made him the first Irish-trained winner of the historic handicap.

Lyons and Keane also run Giga White in a later handicap, while earlier on the Ayr card Son Of Rest’s trainer “Fozzy” Stack runs both American Lady and Piece Of Paradise in the Group Three Firth of Clyde Stakes.

He also sends a handful of runners to Ireland’s sole weekend fixture at Gowran on Saturday.

Roger Varian is the cross-channel traveller here with Shenanigans pitching up for the feature race.

An Ayr listed winner in May, the stalwart mare comes up against a quartet of Ballydoyle three-year-olds, with Donnacha O’Brien opting to ride Frosty who finished last in York’s Galtres Stakes last time. That could be significant considering O’Brien rode Credenza into third in last Sunday’s Blandford Stakes and she is top rated in the race on 104.

The Blandford form looked even better considering Credenza was hampered by the winner Tranawa in the closing stages.

Prior to that Wayne Lordan had ridden Credenza into second in the Hurry Harriet Stakes at Gowran, and the partnership could emerge on top this time.

Heir Of Excitement was claimed out of Joseph O’Brien’s yard after returning to some form with a second at Sligo last time. That earned him a major hike in the ratings but considering he won off 72 when trained by Kevin Ryan he still could be one to note in one of the apprentice handicaps.

Bigger And Better caught the attention of the Listowel stewards last week when his jockey Robbie Colgan got a five-day suspension for breaching the “non-trier” rules.

Tony Martin’s horse has been raised 5lb for that second place effort behind Franklyn, so has topweight for a nine furlong handicap in which he does not look to have been done any favours by the draw.

Colgan is on Sheila Lavery’s Ultra Pride although a value option could be Toffee Galore with an inside draw.