Pinatubo puts in one of the great juvenile performances 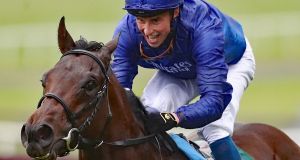 Appropriately on Irish Champions Weekend, Pinatubo put up one of the great two-year-old performances at the Curragh on Sunday.

Aidan O’Brien landed a Group One double on the second day of Irish flat racing’s showpiece event, and for popular impact Pat Smullen’s Champions Race was a wonderful, singular event.

But in strictly wow terms, Pinatubo’s nine-length rout in the Goffs Vincent O’Brien National Stakes was a stand-out.

The Godolphin colt stretched his unbeaten record to five with a devastating defeat of the O’Brien pair Armory and Arizona that had bookmakers cutting him to 6-4 for next year’s 2,000 Guineas.

Whatever about the bookies, other observers were left stretching for comparisons to other superlative juvenile performances such as Arazi’s devastating Breeders Cup romp in 1991 and Frankel’s 10-length demolition in the 2010 Royal Lodge.

The National Stakes is traditionally Ireland’s top juvenile race, and it hasn’t seen anything like this since John Oxx’s Manntari won it by 10 lengths in 1993.

That colt’s subsequent classic career began and ended by finishing last in the following year’s Irish Guineas, which only advertises the dangers of prematurely anointing two-year-old brilliance as the real thing.

But the excitement stamped all over jockey William Buick’s face after his explosive first ride on racing’s newest superstar testifies to the enduring appeal of jumping on to the next big bandwagon.

Buick missed almost three months of the summer campaign with a head injury, which meant James Doyle stepped in on the Charlie Appleby-trained colt.

“It was a hugely, hugely exciting performance in a proper Group One,” said the jockey, while Appleby didn’t rule out Pinatubo appearing again this season in the Dewhurst Stakes.

“He eats, drinks, sleeps and that’s the end of it [at home]. We only ever see the best of him when he turns up at the track,” Appleby said.

“The way he’s developing as an individual over the last six weeks has been noticeable. People were questioning whether he’d just be a two-year-old but he’s got a presence about him. He’s a very exciting horse.”

The Ballydoyle team maintained their momentum after Magical’s Irish Champion Stakes victory the day before with a 1-2 in the Derrinstown Flying Five.

Fairyland beat her stable companion So Perfect by a short head while Ryan Moore doubled up in the following Moyglare Stud Stakes as Love beat the favourite Daahyeh in a driving finish.

The double brought Aidan O’Brien’s Champions Weekend haul to six winners. As well as filling the places in the National Stakes, O’Brien also had the Leger second and third, Kew Gardens and Southern France.

Sunday’s programme was the first Champions Weekend at the new Curragh and it attracted a crowd of 10,075. That attendance was down from the 10,978 returned for the first edition in 2014. A year later the official attendance was 10,384.