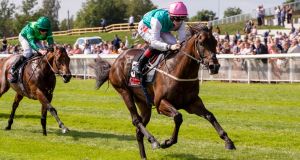 Siskin en-route to victory under Colin Keane at the Curragh in June. Photograph: Morgan Treacy/Inpho

Pinatubo may have wrapped up two-year-old championship honours after his stunning Curragh victory but Ger Lyons is eagerly anticipating his own unbeaten juvenile star Siskin lining up in Saturday week’s Middle Park Stakes at Newmarket.

The unbeaten Phoenix Stakes winner was diverted from Sunday’s Goffs Vincent O’Brien National Stakes in order to remain at six furlongs, a decision that looks inspired in the light of Pinatubo’s nine length romp.

“Somebody tweeted about contenders for the leading trainer performance at Champions Weekend and that it should go to Ger Lyons for not taking on Pinatubo - I wouldn’t disagree with that!” Lyons joked on Tuesday.

The Co. Meath trainer insisted he’s happy he elected to wait for the Middle Park based on Siskin’s proven form over six furlongs. Nevertheless he admitted to being seriously impressed by Godolphin’s unbeaten superstar.

“It was fantastic to see. I was in the stand and people got to their feet when he was at the two pole and started applauding. I thought ‘wow.’ I can’t remember seeing that since Sea The Stars winning at Leopardstown (2009 Irish Champion Stakes).

“He’s the most impressed I’ve been with a racehorse since the Frankel we remember and his first ‘wow’ performance in the Guineas (2011). I don’t think Frankel was a ‘wow’ horse at two,” Lyons added.

Pinatubo is now a general 5-4 favourite for next year’s 2,000 Guineas with bookmakers rating Siskin his main threat and priced as low as 8-1.

Nevertheless the Irish star is only third favourite for 4-1 for the Middle Park behind the Prix Morny winner Earthlight and the wide-margin York scorer, Mums Tipple.

“Mr (Andre) Fabre is going to relocate his Morny winner. There’s Mums Tipple too so it looks like being a seriously tasty Middle Park. It won’t be a freebie.

“But I couldn’t be happier with my horse and I’m very, very happy we made the right decision trip-wise,” commented Lyons who landed the 2011 Cheveley Park at Newmarket with Lightening Pearl.

Buffer Zone struck for Lyons at the Curragh on Sunday in the Bold Lad Handicap and looks set to make a quick reappearance in Saturday’s William Hill Ayr Gold Cup.

Son Of Rest became the first ever Irish trained winner of the famous old handicap when dead-heating with Baron Bolt in the race a year ago. Buffer Zone is an 8-1 favourite to follow up.

“I don’t like running them back that quick but it looks like his last race of the season, it’s a large pot, and David (Spratt- part owner) is keen.

“He’s also two or three pounds well in, whether that means anything or not, and as we speak he looks like going that route,” Lyons said.

Wednesday afternoon’s Naas card is an all two-year-old fixture that features some superb pedigrees.

One of Aidan O’Brien’s newcomers in the seven furlong colts maiden is Battle Of Liege, a brother to the Group One winners Brave Anna and Hit It A Bomb.

Another O’Brien newcomer on the card is Ten Sovereign’s full sister Eden Quay while Excelebration’s half brother War Leader should relish much faster going than he got at Listowel last week.