Racecourse stewards to be given more responsibility over whip rules 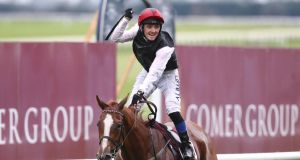 Chris Hayes is among a number of jockeys who have appeared in front of a panel and received a six-day ban on the same day. Photograph: Niall Carson/PA

The Irish Horseracing Regulatory Board has moved to speed up the process involved in penalising breaches of the whip rules by giving more responsibility to racecourse stewards.

Currently, jockeys who breach the controversial whip regulations for a fourth time are automatically ‘sent on’ to appear before a Referrals Committee hearing.

If found guilty they are given a minimum six day suspension.

Some of Ireland’s best known jockeys have been referred on since the new rules, which feature an eight stroke limit, were introduced in April.

Earlier this month half a dozen riders, including classic winners, Seamus Heffernan, Kevin Manning and Chris Hayes, appeared in front of a panel in one day. All received six day bans.

However the IHRB has confirmed that from Friday racecourse stewards will deal with any fourth, fifth or sixth offences in relation to the whip. Jockeys will only be ‘sent on’ after a seventh breach.

That means any suspensions can be handed out immediately on the day of the offence rather than dragging the process out.

“Fourth, fifth and sixth offences won’t be referred on as they are at the moment. If you’re found guilty of a fourth offence you’ll get your minimun six days there,” said the IHRB spokesman, Niall Cronin on Monday.

“It’s a tweak to the process to speed things up,” he added.

Earlier this month the Irish Jockeys Association outlined what it described as a growing groundswell of discontent among its members about the whip regulations.

It has called for a review of the rules and for greater consultation with riders.

The IHRB’s eight stroke limit has brought Irish racing into line with other European jurisdictions. France allows just five strokes and Britain permits seven on the flat and eight over jumps.