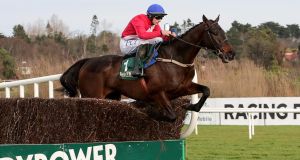 Allaho is set to line out at Thurles on Wednesday. Photograph: Laszlo Geczo/Inpho

Jump action resumes in Ireland on Wednesday when Thurles stages its biggest fixture of the year.

The rescheduled meeting, which features a pair of Grade 2 prizes, was frozen off on Sunday but now begins a busy run of January National Hunt action.

It will be the first jumps card in this country for eight days and starts a run of big-race action that continues into Thursday’s Thyestes programme at Gowran.

Friday sees the Navan meeting cancelled last weekend take place with Fairyhouse and Naas set to race over the weekend.

Willie Mullins and Gordon Elliott have each declared five runners for the €100,000 Goffs Thyestes Chase with Mullins chasing three in a row in the historic handicap.

Champion jockey Paul Townend has opted to ride the Thyestes topweight Acapella Bourgeois but will be busy before that at Thurles where he can fancy his chances on all three of his rides.

They include Allaho who looks set to benefit from the drop back in trip for the Horse & Jockey Hotel Chase.

The free-running sort finished fourth to another Cheveley Park owned runner, A Plus Tard, in the Savills Chase over three miles at Christmas.

“I was happy with his work during the week and this distance might just suit him better with a change of tactics too. He goes there in good form and with a good rating,” Mullins told Sportinglife.com.

That rating of 160 means the conditions of this race suit him, given he gets 7lbs from Battleoverdoyen, in a contest where Mullins’s other three runners give him an overwhelming numerical edge.

The champion trainer can also dominate the Coolmore Mares Novice Chase with his pair Colreevy and Yukon Lil.

The latter is no back number getting 7lbs from her Grade 1 winning stable companion although Colreevy might relish a stamina test more.

Envoi Allen’s half-brother, Fighter Allen, flopped in a Grade 2 at Navan last month after which Townend reported the horse had lost its coordination and stopped quickly.

He looks worth another chance in the four-runner novice hurdle.

Tuesday’s scheduled Down Royal fixture was cancelled due to frost and has been rescheduled for Thursday week.

One of the highlights of the coming weekend action could be an appearance by Asterion Forlonge over three miles at Naas on Sunday.

The Grade 1 winning grey fell at Limerick over Christmas and subsequently crashed out at the first fence at Punchestown last time turning a much anticipated clash with Envoi Allen into an anti-climax.

He is one of 10 entries left in the Naas Business Club Novice Chase after Tuesday’s forfeit stage.